It was a busy weekend, as I was working on Saturday, and spent most of Sunday watching my boyfriend participate in the Blenheim triathlon, so I didn't do that much baking, and I didn't do that much reading either. I thought I was going to get a lot of reading time at Blenheim, but it was so exciting rushing round the course and trying to spot triathlon-man that I didn't even get my book out of my bag!
But we did need some cake to sustain us, and here's what I made: 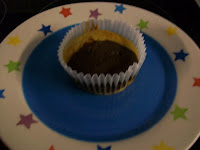 Some chocolate and vanilla buns, loosely based on this recipe. I thought buns would be more transportable to the triathlon (I had been instructed to provide cake on the finish line, although in the event this was not taken up), plus the leftovers could go with boyfriend to the office this week. I was going to marble them properly, but I thought they looked quite good like this. And I was going to smother them in chocolate but then you wouldn't have seen the two halves! 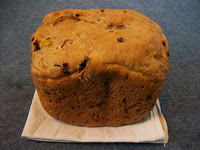 Some fruit bread in my bread machine. I make this quite a lot and toast it. It's a combination I've refined over the last few years of breadmachining - 300g white bread flour, 80g brown bread flour, tablespoon of brown sugar, tablespoon of oil, one sachet of yeast, 250ml warm water, and a good shaking of mixed spice. Then I add 30g raisins, 30g mixed peel, and 45g currants halfway through. 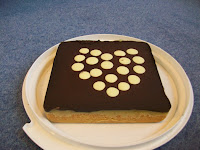 Celebratory millionairre's shortbread. Based on this Nigella recipe, I made this a few weeks ago but it is a little bit of a faff, owing to having to cool each separate layer, and so I said it was only for special occasions. Still, triathletes deserve something special, so I made it again, with the addition of white chocolate buttons in a sort of heart shape on the top.
Posted by verity at 16:06