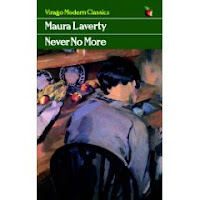 It was time for another Virago title last night, so I picked up Never no more from the pile of library books in the sitting room (it is a very big pile, because Oxfordshire libraries are very generous and allow one to borrow 20 books at once, and because I have my boyfriend's library ticket as well as my own).
This is the story of 13-year old Delia at a turning point in her life. Her father has just died, and her mother is about to move (with her brothers and sisters) to start a dressmaking business in another town. Delia's grandmother feels that this would not be best for Delia, and offers her the chance to stay behind and carry on attending school. The book is about her subsequent life, her relationship with her Gran...not very much happens, but it is a wonderful evocation of life in Ireland in the 1920s.
I love this sentence which is representative of Delia's feelings for her grandmother and is typical of Laverty's wonderful writing:
"Human nature is like bread I think. Soda bread calls for buttermilk and baking powder bread for new milk. Use the wrong kind of milk and the bread is sodden. Gran was the right kind of milk for me".
Almost every meal is outlined in detail in this sort of style - not just what it was, but how it was made.
The edition that I have from the library has an interesting introduction by Maeve Binchy - I've read some of her novels (Evening Class is probably the best, but there was a period when she produced almost one every year which Mum and I would get for our summer holiday) which are very light, so it felt a little strange to see her writing in quite a different context, and before her commercial success. She points out that the book is certainly not autobiographical as Laverty never lived with her Gran and that although it is a disappointment to discover this, perhaps we should see the book as the sort of childhood Laverty wished for rather than the one she actually had. She fills in some of the biographical detail to Laverty's life, which is interesting, apparently her two cookbooks graced almost every kitchen across Ireland when Binchy was growing up, which explains the attention given to describing the meals eaten in the text.
Posted by verity at 16:55