Baking from the cupboards 5

I have been baking from the cupboards for OVER A MONTH now - I am feeling quite impressed with myself (and also a little ashamed as how could I have built up such an enormous stash of things?). I gave myself a little reprieve to make sachertorte last week, but that wasn't so very excessive really, as I had apricot jam in the fridge leftover from sticking the marzipan onto my Christmas cake, I needed some double cream to make some more quiche so all that I actually bought was 400g of dark chocolate which came in at only £1.20. As it was a Valentine's Day treat, I think that is quite acceptable!

I wasn't going to mention my disastrous cupboard bake this week, but I think I will as it emphasises the fact that you can't always make cunning substitutions in baking. I wanted to reprise the gluten free apple cake, but halfway through making it I realised that I had run out of baking powder. I did have some bicarbonate of soda, so thought that I would use that instead. Sadly, the two are not interchangeable. Bicarb is four times as strong, and my heavy handed use of it made it absolutely inedible. Even K couldn't eat it :(

Luckily, with my baking from the cupboards mindset on, I managed to salvage the situation so that K could still have some pudding when he got back from his cycling session and finally made my own recipe No-bake-Nutella-chocolate-cheesecakes (and finally, I took a picture that I can show off!). All I did was to bash up two little mini packets of chocolate animal biscuits (leftover from taking K's nieces to the ballet before Christmas) and stir the crumbs into half the amount of melted butter. I put that into the bottom of two Nutella glasses, and then beat some cream cheese with about 1/3 of a small pot of Nutella and spooned it on top (as you can see I didn't do a terribly tidy job). And then I got out my white chocolate stars to decorate it with. 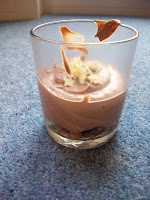 The other cupboard bake that I produced this week were some slightly blobby jam flower biscuits, to use more of the apricot jam that I had rediscovered, and also as I discovered we had some strawberry jam lurking (oh the shame of all of the food that I have accumulated). They weren't quite as successful as the last time I made this recipe, but I put this down to the fact that I used more expensive strawberry jam which I should have sieved as the pieces of fruit made it a little difficult to pipe. 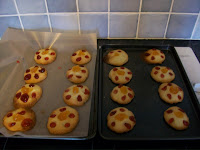