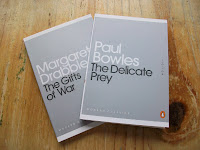 A short post today as my wrists and fingers are sore and I'm a little scared that I might be developing RSI. Hopefully resting up over the weekend will help, but I couldn't resist showing off these new little books which I recieved to write about last week. These are Penguin's Mini Modern Classics, which are being released to celebrate the 50th anniversary of Penguin Modern Classics. There are 50 of the titles to collect and they showcase "short" writing from great writers of the last 100 years. I am particularly excited to see Margaret Drabble's The gifts of war because I have read and enjoyed very many of her novels. I have not come across Paul Bowles before but apparently he is "considered one of the most remarkable American authors of the twentieth century" [Amazon]. When I spot these in the shops, I will be on the look out for the Shirley Jackson's The tooth, because I greatly enjoyed both The haunting of Hill House and We have always lived in the castle (both of which were published as Penguin Modern Classics).

Thanks to Ceri from Riot who sent them to me!