Baking from the cupboards 4 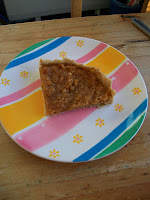 Baking from the cupboards is proceeding incredibly well; I've still not bought any baking ingredients and I don't think K is at all deprived of baked goodies!

The highlight of this week's baking from the cupboards was my treacle tart. I've never made this before, but it was so easy and oh so frugal as it enabled me to use up the end of the homemade bread that was a bit too tough even for toast - I attacked it with the grater and it made fantastic bread crumbs. And it meant I could make pastry again. The recipe was Mary Berry, but it is no more complicated than a pastry shell, a slightly greater amount of golden syrup than crumbs and some lemon zest/juice.

Of course it was also Valentines Day; I was short of time so I'm afraid K only got some vanilla shortbread hearts but I put them into his lunchbox and I hope that he wasn't too embarassed! I did make some cheesey gluten free hearts too to have as a nibble with dinner that night; unfortunately they resembled cowpats as they did not hold their shape. Not terribly romatic but all using store cupboard ingredients. I had promised myself a reprieve for Valentines Day, and when I have the day off at the end of the week I will be making sachertorte - I can barely wait! I picked up both chocolate and cream for less than £2 so it is hardly extravagent even if it involves a whole box of eggs...(however, this aside I am fully determined to see out this project - I have enough things to bake with for at least another month if not longer!)

Finally, I reprised my mini cheesecakes (and yet again forgot to take a photo); this used up the last of the digestive biscuits (although I have plans for a chocolate version involving some mini chocolate animal biscuits that are languishing in the cupboard...), and the last of the dessicated coconut. I used coconut milk rather than cream to mix with the cream cheese, and topped it with some frozen cherries.
Posted by verity at 15:55