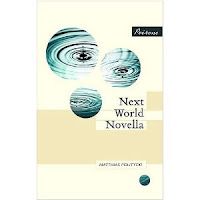 I am excited to be writing today about the latest novel to be published by Peirene Press, Next World Novella, which came out at the very end of last week on the 18th February. Having been somewhat dilatory in posting about their last book, I was determined to give it a timely mention this time around, not least because I devoured the book almost immediately upon recieving it. But before I start, you should perhaps watch the book's trailer here, how exciting is that?

Last year was Peirene's Year of the woman, this year it is the year of the man. Next world novella, by the German Matthias Politycki, tells the story of a man, Hinrich, going through his wife, Dora's papers after her death. He thought he knew her well, but the more he reads, the more he finds out that actually she has held a very different perspective on their relationship. And so the papers chart the breakdown of their marriage.

If I'm honest, although I found the synopsis intriguing, the book took a little while to draw me in. As I said to Meike [Peirene's founder and director] : "I didn't think I was going to like it, but as I read on I was absolutely captivated and surprised by how it turned out."

It's difficult to say too much more without introducing spoilers, an inevitable difficulty of writing about a novella, but the blend of insights into life after death along with the intertwining of two lives which have been revealed to be more separate than they first appeared made this book Hinrich's discovery and insight into thought about life after death made this book enthralling.

Like last time, I want to draw attention not only to the book but to the team behind it; Peirene Press are the most friendly publishing company I have come across who are developing a real niche for themselves in the market. If you haven't seen their entertaining blog, detailing the adventures of the little nymph who calls the shots at Peirene Towers, then you should definitely check that out too. And they sell sets of their books, and beautiful bags to put them in as well which I think could make excellent presents.

PS: If you are on twitter, @PeireneVoices will be hosting a chat with the author on Tuesday 22nd February, 8-10pm
Posted by verity at 17:29