Baking from the cupboards 2

Baking from the cupboards is proceeding rather well. Since the Christmas Pudding Cupcakes there have been four further creations from the things lurking in my cupboard, and there is still plenty of other ingredients to play with (although I am now out of both raisins and sultanas; currants and cranberries and cherries are the only dried fruit that is left).

Firstly: PUDDING. or more specifically toffee, banana, and date pudding.
This was a recipe from a Weightwatchers supplement that came with one of the food magazines that I subscribe too. But I think it was only a weightwatchers recipe if you used low fat marg. (I used butter), and made four puddings with the quantity (I made two...), and used skinny custard. Oh well, I didn't say anything about baking healthily did I?!

These have a little bit of golden syrup at the bottom. You could make them in pudding basins and turn them out but I decided to use my heart shaped dishes. K insisted that I get custard... 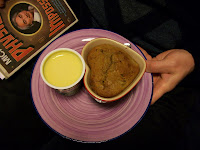 Secondly BISCUITS, or more specifically Orange, oat and sultana cookies.
These ARE actually quite healthy as they contain lots of fibre. I spotted this recipe in the February Good Food magazine and was excited as they contained lots of ingredients which I had in - banana, coconut, walnuts... I didn't have an orange, but they still apparently tasted good without. Oh and I had to use raisins instead of sultanas too... 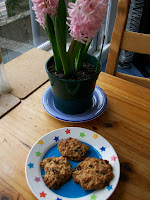 Thirdly, CAKE, or more specifically apple cake, that I posted about on Sunday as part of Virago Reading Week.

Fourthly CHEESECAKE, or more specifically mini no bake lemon cheesecake. I forgot to take a picture of these but I will definitely be making them again as a) there are still more digestive biscuits to use up before they go soggy b) I realised that by using GF biscuits I can make them gluten free for me! (And the cheesey mix was soooooo good that I probably should make it properly into a cheesecake for me rather than eating it on its own)

I am quite enjoying the challenge of using things up - the things that are next in my plans are apple and blackberry crumble or pudding, ditto plums (have jar of plums and blackberries from my friends allotment) or pumpkin pie as I found a tin of pumpkin puree that I'd bought in a fit of enthusiasm one time.
Posted by verity at 10:38