Notwithstanding : stories from an English village (Louis De Bernieres) 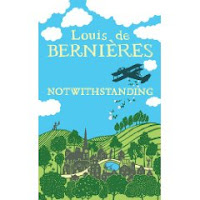 I sometimes feel that I am the only person left in the world who still hasn't got around to reading Captain Corelli's Mandolin. However, I have heard such good things about Louis De Bernieres that when I was offered a copy of his latest book by Harvill Secker (to be released on the 1st October), I had to say yes, to find out more about this writer, even though it is a book of short stories and I am not a great short stories fan.

Before I go any further, let me just say that saying "yes" proved to be a good decision, and may even have changed my feelings about books of short stories. These are not discrete short stories, but connected by the village of Notwithstanding in which they are set and characters reappear throughout the stories which builds up a picture of the whole community. Many of these stories have previously been published in various newspapers and magazines, but some have been written for the volume, and one would not guess that it had not been writen as a whole.

The tales from the village of Notwithstanding draw upon the experiences of Louis De Bernieres childhood in the south of Surrey in the 1960s and 1970s. According to the afterword, he chose the name because he felt that the rural idyll that he remembered had "notwithstood". But actually, the more he thought about it, some elements of the village were still there. I grew up in a small Devon village in the 1990s, and the book was strongly reminiscent of life there.

The book also makes reference to changes in the village, for example the influx of newcomers who aren't wholly at one with the country life: "They moved here in search of picture postcard Englandand are uncomfortable with a real countryman who knows how to wring the neck of a chicken and has no compunction about drowning kittens in a bucket"

I loved the story about The Girt Pike, in which young Robert is promised peanut butter sandwiches by Mrs Rendall if he can catch the pike from her pond which is eating all her baby chickens and ducklings.
""Please do come up and catch it. I'll bring you cups of tea and as many sandwiches as you can eat, I promise."
"Peanut butter?" asked Robert, aware that posh people sometimes put truly revolting pastes made of rotten anchovies into their sandwiches.
"Peanut butter, or jam or anything," said Mrs Rendall, much amused.

Other stories include Broken Heart, in which an elderly gentleman is persuaded to move away from the village by his daughter to raise some capital and sadly dies because he cannot bear no longer living there and Obadiah Oak, Mrs Griffith and the carol singers which describes a lonely woman who for once decides to be hospitable to carolling children, only to find herself not visited this year as she has not been welcoming in the past.

I thought this book was truly wonderful, and the stories are definitely ones that will stay with you for sometime. It's a book to dip into or to read in a longer session, and I certainly hope that this book will be as popular as his other works. I am now very keen to try one of his novels. The obvious one is Captain Corelli, but I wonder if anyone else would recommend any of the others?
Posted by verity at 17:00