Bake of the week : Autumn Flavours 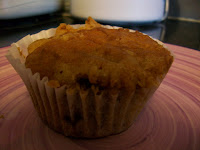 We used to grow apples at home, and once September got underway there would be a procession of cakes and puddings involving apples. Now that I have to buy my apples in the supermarket, this doesn't happen, but as soon as September comes I do get cravings for apple flapjacks, apple sponge pudding and stewed apple. So this week I decided to make one of my favourite new recipes from last year: BBC Good Food's Blackberry and Apple Loaf. Yum yum...


After smelling the apples, I was desperate to have some apple flapjack, so I made some of that too. In fact, I made it twice, in a vegan version, and a non vegan version. Here is a piece in its all-butter glory (I wouldn't bother making it with vegan margarine, it is just a disappointment). 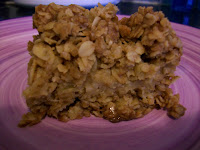