Those who marched away : An anthology of the world's greatest war diaries 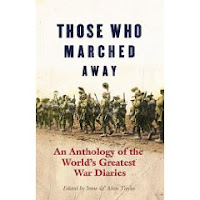 This immense tome arrived on my doorstep from Canongate the other day, and I have finally got around to having a proper look at it. Edited by Irene and Alan Taylor it is a vast compendium of diaries from an immense variety of people who have lived through wars and fought in them across a wide range from periods, from the 17th century, through 2 World Wars to the present.

What is special about this book is the way that it is arranged; rather than seeing each diarist as individuals we see them chronologically - there is a diary entry or several entries for each day of the year. This makes it possible to compare diaries from different periods in a different way. And it really shows that unfortunately war is not an isolated experience, it recurs.

For yesterday, 16th September, 8 entries were given. The diarists include Anne Frank, the politician "Chips" Channon, Lord Reith, Joan Wyndham and Leo Tolstoy. So, very many high profile people are included. In the index of biographies included I recognise many names such as Violet Bonham-Carter, John Evelyn, Edward Ardizzone, Goebbels, Hitchcock - so people intimately involved in fighting wars but also those observing it. The list however also includes names that one would not recognise, such as lowly privates and foot soldiers. I like the way that this "rediscovers" writers who otherwise might be forgotten or overlooked.

I have to say that I think this would make a wonderful Christmas present; it would be lovely to be given this at the start of the year and be able to dip into it each day to read about different events. It is being released on 1st October.
Posted by verity at 17:28