A week off work in which I have no especial plans: part 4

I have to say, I'm actually finding this week a bit tedious. Which is interesting, as I often fantasise about the opportunity to be a housewife. To be fair, if I was doing this full time then I'd build in some other things, such as volunteering, and maybe rejoining a brass band, but there isn't the time in just one week. But I miss having human interaction during the day (twitter people are great, but it's just not the same), and a sense of purpose. And, although I hate to say it, there is only so much cooking one can do!

Still, I've done some cooking today. I have the makings of a no-faff Jamie Oliver fish pie ready to go (picture tomorrow I hope!), I made the most amazing soup which I had to resist eating as it is for the mother-in-law's visit on Saturday (pumpkin chowder - yum!), and I've made ginger and chocolate biscuits and some slightly over glittered mars bar rice crispie fridge cake pieces for Mr W to take into work on Friday (his birthday). 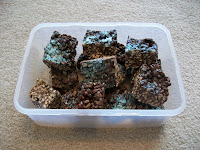 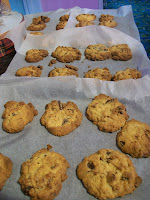 I did wonder about going to the cinema, as I'd quite like to see Jane Eyre, but at the point when I had to make a decision, the sun was still shining (it's now disappeared and is cold and grey), and I was tired, having cycled to the outdoor pool (6 miles away) and back. And my foot still hurts. According to the doctor I have Plantar Fasciitis, and he claimed there was little to be done apart from rest and do some stretches (and certainly not run), however, a couple of friends have given me some more meaningful advice. 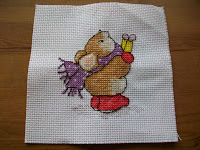 So instead I've finished my cross stitch, and am wondering whether I have the courage to return to one of my big works in progress or whether to start a mini Christmas pudding cross stitch. It's September, it's definitely not too early to be thinking about Christmas! I'm wondering about getting a book out until Mr W returns; I very much enjoyed reading Sissinghurst, an unfinished history yesterday, which really put my visit last month into context. I don't have anything that really grabs me today except for some lighter material, and I feel a bit guilty reading chick lit or Maeve Binchy on a holiday! Ho hum.
Posted by verity at 15:50