A week off work in which I have no especial plans: part 2

So...my Monday morning was filled with household things, and whilst not quite as inspiringly domesticated as last Monday morning's bakeathon, it has been more pleasing than simply cleaning the bathroom!

I started off by preparing some Christmas chutney. I made it last year, and although Nigella said 6 weeks was enough to mature, it could have done with a bit longer, so I'm making it now. Unfortunately, it was impossible to get hold of frozen cranberries, luckily I had some in the freezer from last year, but only enough to make half a batch. It still made 6 jars though! 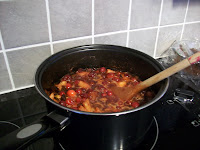 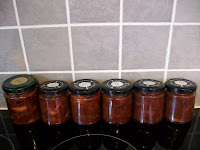 I also roasted some peppers to go with fish and potatoes tonight... 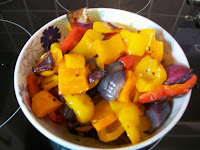 ...and baked a loaf of bread to try to get rid of the vinegary smell that was permeating the house.

Then it was time to sort out the new bookshelves - they do make the living room feel a lot more homely. Of course it will be better once the dining room/study has been decorated and we can move the PC out... On the lefthand side are my Virago Modern Classics - it's nice to have them all together. 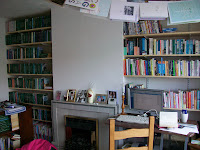 The rest of the morning's jobs were mundane - cleaning windows, cleaning oven, sorting out washing, and ironing, definitely not worth taking photos of. But despite the heavy winds I managed to cycle to the pool, swim 3km, and then cycle home again. Definitely a relaxing afternoon was deserved (although, a caveat, by the time all of the above was completed it was twenty to four...)

I did manage to spend some time doing some cross stitch - I vowed at the beginning of September to devote at least an hour a week to doing something crafty and I'm on my second little cross stitch since that (actually this one is bigger than the first one I completed). Turns out I wasn't doing cross stitch since the two projects I was working on were enormous and intimidating. Much better to do something less complicated and actually complete it! 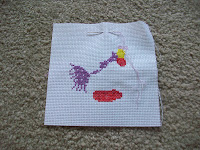 And I have been reading an obscure Elizabeth von Arnim novel called Father. It's not anywhere as good as her novels which have been republished as Virago Modern Classics (let me recommend to you Christopher and Columbus or The Caravaners, as well as the obvious Enchanted April or Elizabeth and her German Garden). But it's most amusing and a delightful way to spend the afternoon - it tells the story of Jen, a 33 year old spinster who is charged with looking after her father when her mother dies. Until he comes home with a 20 year old new wife. Jen swiftly realises that this is not an ideal situation, and seizes the chance to find somewhere to live with a garden - having lived in London's Gower Street with only her mother's windowboxes to tend she dreams of digging! Finding a cottage through a clerical magazine proves easy, but as one might expect from a von Arnim novel, life is not so straightforward -the vicar who let it to her is rather taken with her, her father's new wife leaves him...

Now I'm looking forward to Mr W getting home - despite some wonderful twitter chat today I'm ready for some human company.
Posted by verity at 16:59