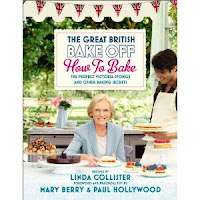 Tuesday night television is at the moment completely devoted to watching The Great British Bake Off on BBC 2 at 8pm. For the uninitiated, we have been watching 12 bakers be whittled down to now 4 (tonight is the semi final) through a series of challenges, hosted by the wonderful Sue Perkins and judged by the baking gurus Mary Berry and Paul Hollywood. Each week has a similar format - there is a theme (e.g. biscuits/cakes/pies) - and the bakers first have to make a signature bake on the theme (e.g. a cake or biscuit with their personal twist on flavours/presentation), then do a tough technical challenge where they are presented with a simplified version of a recipe by Mary or Paul (e.g. brandy snaps or pork pies) and have to work out exactly how to execute it, and finally produce a showstopper bake - last weeks was a croque-em-bouche (tower of profiteroles!). Apart from resenting the fact that I sent in an application form and didn't even get a telephone interview (well, to be honest, how would I have fitted it around baking my own wedding cake this year?!), I am absolutely gripped. I find myself learning a lot as well as being absolutely fascinated by the ideas being executed.

I have to confess to having bought the accompanying book.; I bought last years book too and was curious to see what this looked like. Last years book featured two recipes from each of the contestants as well as a plethora of baking history which was absolutely fascinating introducing each chapter, and was also a good all-rounder book with recipes In some ways it's quite disappointing - there are some recipes from the contestants from the series, but it doesn't say which recipes are whose, and I would have liked to have seen more of these as there have been some pretty impressive things baked on the show. The one thing that is absolutely excellent is that each of the "technical" challenges are featured, with a step by step photo guide, and tips or hints from Paul and Mary. Maybe I will brave making a lemon tart finally. It's definitely an all-rounder book - chapter on biscuits, chapter on cakes, chapter on pastry, chapter on pies etc. Always, however, the test of the recipe book is how many things one wants to make from it - that's what gives a recipe book value for money in my opinion! I was disappointed by the biscuits chapter, where the biscuits were mainly boring (made lots of times before), or inordinately complicated (e.g. macarons) - biscuits for me = things to put in Mr W's lunchbox. The cake chapter came up trumps with 3 recipes that I wanted to try - cherry bakewell cupcakes, banana fudge layer cake, and this - I call it Paddington Bear Cake, but the book calls it Marmalade Cake. It's essentially a basic sponge with 3 table spoons of marmalade inside it, and another 3 melted over the top when it comes out of the oven, and topped with water icing. Next time I'd leave the icing off as it was very sweet, but it's very quick and was a perfect thing to make after my first day back at work post-mumps. (yes, I should have probably gone straight to bed, but I needed cake...) 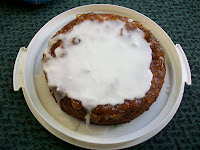