A week off work in which I have no especial plans: part 3

Today I was supposed to start by sanding the woodwork in the hall; we need to get the hall decorated as a priority so that we can replace the disintegrating carpet (which despite being a very funky swirly pattern also smells). However, I made Mr W's sandwiches, some jam tarts, a frangipane nectarine tart, and a gluten free nectarine crumble before I started. Don't they look tasty? 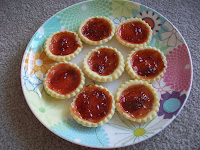 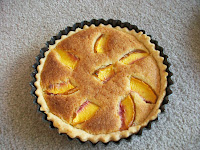 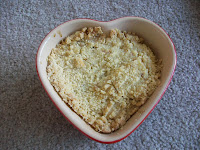 The sanding was hard, dusty and horrible work, and then I had to hoover up afterwards :( and then just as it was time to cycle to the pool for lunchtime lengths, it started tipping down with rain. The silver lining to that cloud was that the wind broke the washing line yesterday, so today's load of washing (mainly cleaning cloths from yesterday!) was at least inside. The 3km swim was hard as my arms were tired from sanding, but the sun came out as I cycled home and I had jam tarts for lunch (the jam was homemade from PYO strawberries so that must count as one of my five a day?!).

It's now nearly 3pm so I need to find a book, particularly as I have to go to the Dr's in a couple of hours - I seem to have mangled my ankle after starting Couch to 5k and want to get it checked out. I hope it can be mended easily as I was only 2 runs in and it feels a little pathetic to give up now. Choice between Adam Nicholson's Sissinghurst: an unfinished history (following my visit the other week) or Gillespie and I (Jane Harris)(which I won in a giveaway a little while ago and have been hoarding...). I might pop into the library on the way to the Dr as I have amassed a pile of returns.

Tonight is the next episode of the Great British Bake Off, so I'm hoping that Mr W and I will watch that. I hope to do some more cross stitch - as you can see I've made quite a bit of progress since yesterday! 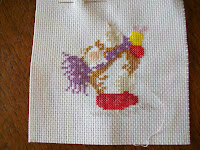