On the first day of Christmas (and the second and the third...) I was reading...

On the first day of Christmas... 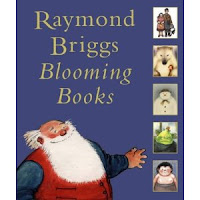 I was reading, Blooming books by Raymond Briggs. Recommended to me by the lovely Dot Scribbles, this is part anthology, part discussion of the illustrator's work over the years. I thought it was just going to be a compendium of all of his books, so was fascinated to read all the analysis as well. This was a present from my lovely fiance, which just made it through the snow to arrive in time for Christmas! I spent some time on Christmas Day leafing through it, and it was much admired by some of the in-laws too.

We spent Christmas Day dashing through the snow - K's father is presently in hospital in Hampshire, so we went down there first thing (after opening our presents of course!). While we were sitting chatting, out of the corner of my eye, I spied a tuba go past! And to my pleasure, 10 members of the Salvation Army turned up and started playing carols to the patients. I have to say that that absolutely made my Christmas - I love brass band carols and they even played Tye first nowell for me! It was then back to Wokingham for Christmas dinner with K's brother, sister in law, their three girls, his sister, mum and Gran. I'm used to Christmases with a maximum of three people so it was a little overwhelming, but I was allowed to take Bernard, my new cuddly teddy bear with me!

When we got home, I read Trouble at Skelton Hall by Elinor Brent Dyer. Not as good as her Chalet School books!

On the second day of Christmas....

I didn't have much time to read. After sleeping in until 11am (needed to catch up after a chaotic week!), we went to London to see the Matthew Bourne production of Cinderella - despite allowing time for lunch, the combination of Boxing Day traffic and a tube strike meant we arrived with 10 minutes to spare. We were glad to have made it though as we thought it was superb - by no means conventional ballet, more modern dance, it was a fantastic setting of the familiar fairy tale in 1940s Britain. There was so much clever choreography and so much to watch that we will probably go and see it again when it tours to Oxford next summer. (The only thing that let it down was the recorded soundtrack).

When I got home, I opened up Eat me by Xanthe Milton, a baking book recommended by Joan Hunter Dunn from Flowers and Stripes - I picked it up very cheaply before Christmas from the Book People. Lots of lovely things that I want to make in it (will have to write more about it in due course when I get to some of the recipes!)

On the third day of Christmas...

K's Dad is very poorly and has moved hospitals in anticipation of a blood transfuction, so as K has gone down to see what's what, I'm at home doing some jobs and watching Torvill and Dean on the t.v. We were supposed to be entertaining my parents this evening, but after I'd bought lots of nice things firstthing, my Dad phoned to say that he still has flu and didn't feel well enough to come round. I'll pop around later to give them their Christmas presents, but in the meantime, I'm trying to finish Wait for me by the Duchess of Devonshire, so that I can lend it to him! It's hugely entertaining so I had better get off the computer and get back to it! 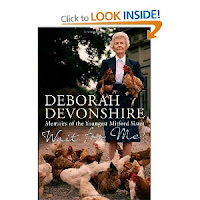