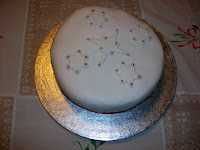 This is the first time I've made a Christmas cake, but I thought I'd use the chance to practice doing a celebration cake ahead of attempting to do something for our wedding next year. Good job I did, as I have to say I'm slightly disappointed with the results. Obviously, a large part of the cake's success will be in the eating, and I'm hoping that the vegan/gluten free recipe that I made comes up trumps (I think it will as I've used it before). But aesthetically, I feel it is a little lacking...

The first problem came when I put the icing on. Or rather it came with what I hadn't done before - levelled the cake out, or used sufficient marzipan to create a flat surface. The first layer of sugar paste provided a quite wobbly surface. Fine, I thought...I was planning to make Penguins to go on top, so that will make a nice snow scene. Until I (and then K) tried making Penguins. We followed the instructions but the results were not fit to go on a cake; I think a 5 year old would have made better Penguins. So it was back to sorting out the wobbly cake.

K cleverly built up the surface with more sugarpaste and then I covered it with another layer of sugarpaste, which did come out reasonably ok. It is just that the cake looks a bit wonky. I cut stars out of more sugarpaste and decorated them with silver balls...it's not fantastic, but it'll do, and I'll need to

Future sister in law saw it on Monday night, the day I covered it, and was very complimentary about it, so perhaps it was not as bad as we thought.