We had another festive outing this weekend, again to London, to participate in Tuba carols!

It's not something I've written much about on this blog, but I used to play the euphonium and baritone in various brass bands over a number of years (in fact, it was at a brass band event where I met K, and got to know him when I joined the band he was playing with). I had to give up 2 years ago when my stomach problems got particularly bad, but it is something that I miss dreadfully. Occasionally tho, I get the chance to join in a one-off event, so when I was emailed about Tuba Carols last week I couldn't resist persuading K to take me to London for the day to join in.

Tuba carols is a fairly long-standing event that resumed 3 years ago after a few years hiatus and basically involves tuba players turning up at St Paul's Cathedral on the second Sunday in December and playing carols for 1.5 hours. to raise money for charity, this year Barnardos. The term "tuba" is used rather loosely, it wasn't just orchestral tubas that were present. As I mentioned earlier, I have a euphonium and baritone (small tuba and tiny tuba shaped instruments), which is what we took along - I was the only baritone player, apart from a couple of German baritones. There was a tuba in F (usually tubas are in Eb or Bb), a couple of sousaphones (the sort of tuba that you wear (I now really really want one of those), and a couple of cimbassos (a strange sort of trombone tuba hybrid). There may have been a Wagnerian tuba too.

Here is a picture of the group that turned up, conducted by Patrick Harrild, principal tuba with the London Symphony Orchestra: 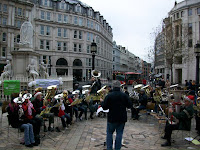 I of course took the opportunity to get my pink tinsel out: 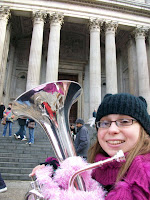 It was quite chilly playing, even if the weather was warmer this weekend than it has been. So we had a much needed gingerbread latte afterwards :)
Posted by verity at 17:11