I am quite proud of my first ever batch of mince pies, particularly as they also happen to be vegan and gluten free. I used this recipe from the Butcher, Baker blog. I found the pastry a little difficult to work with, so was glad that I was only making mini pies rather than a large tart; I also found the pastry a little tough on eating, but I'm wondering about using the gluten-free baker's friend Xanthum gum, which is often added to make GF baking more fluffy. Still, they were devoured by K as much as me (with some brandy cream :) ) and they look so pretty! 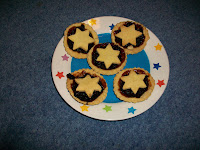