As most of my regular readers know, as a child, I read voraciously. And quite a lot of the books I read were published by Puffin. I remember once sitting looking at my shelves and comparing the numbers of books by each publisher (yes, I was that weird!); I had a lot by Red Fox (mainly because they published my favourite Monica Dickens World's End and Follyfoot books and William Corlett's Magician books), but the imprint which I had most of, was Puffin. I have a huge number of Puffin books among my collection (well, 59 out of 1400+ according to librarything.com - very early Puffins which were passed on from my mother (The Fell Farm Books), some of them are absolutely classic Puffins (The Family from One End Street which my father read to me), and some of my favourite books of all time (Ballet Shoes, the Carbonel books, Milly Molly Mandy, and Laura Ingalls Wilder).

The Puffin imprint was initially established to mirror the work of Penguin, in making books accessible and cheaply. The first editor of the Puffin list was Eleanor Graham, a lady who may be familiar to Persephone fans for her Children who lived in the barn. Over two decades from 1941, she built up the list to 150 titles, initially focussing on publishing books which had already been published in hardback. This was not without difficulty; librarians, teachers and authors were all sniffy about paperbacks and didn't want to release their titles to be published in paperback. The very first title was Worzel Gummidge, and other early titles included The family from One End Street, Ballet Shoes and the Adventures of Professor Branestawm.

This year is the 70th Anniversary of Puffin and there are two absolutely wonderful books which anyone who read Puffin books as a child should own. The first is the new biography of Kaye Webb, by Valerie Grove, called So much to tell. 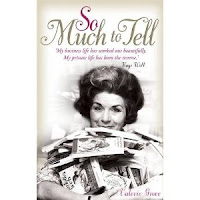 A hugely fascinating woman, Kaye Webb was the second editor of the Puffin List, and was responsible for much of its success. Whilst she was fortunate in entering the industry at a time when children's books were entering somewhat of a golden age, she built up the list and effectively changed the face of children's publishing. Webb had read that during childhood the average child could read around 600 books, and she was determined to make as many of those books "count" and be worth reading, and this was the stimulus for her work. Webb was also responsible for the creation of "Puffin originals", books which were published first in paperback. Stig of the Dump was one of the first of these. But one of the things which Webb was most famous for was the establishment of the Puffin Club, and reading about the fantastic competition prizes (trips to Lundy Island to see Puffins for example, or a trip to Alderley Edge with Alan Garner to see the locations of his books) and the huge involvement of the Puffins authors made me feel very unfortunate to have been born too late to be involved.
There's so much more that I could write about the history of puffin, but you will have to get hold of the book and read it for yourself!

The biography also tells the story of Webb's personal life, which Webb herself admitted was somewhat of a failure in comparison to her career in publishing. Two short-lived marriages preceded her ultimately unsuccessful marriage to Ronald Searle (of St Trinians fame) and it seems that she wasn't the best of mothers either. Her life certainly revolved around her work, and she found it a big wrench to retire. 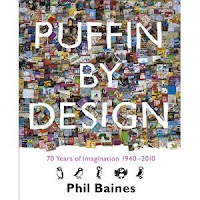 The other book is Puffin by Design, by Phil Baines, who wrote the wonderful Penguin by design. Like the earlier book, this is a history of the covers used by the imprint and is illustrated with lots of lovely images of the books throughout the ages. There are many books which I haven't heard of which look absolutely fascinating!

Anyone care to share a favourite Puffin book? And which one is your favourite out of the 7 Puffin modern classics (one chosen from each decade?) - mine has to be The family from one end street.
Posted by verity at 17:00