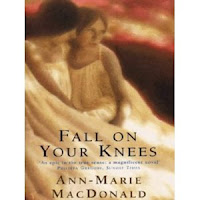 After Claire from Paperback Reader telling me how much she "enthusiastically" recommended Fall on your knees by Ann Macdonald, along with other wholehearted endorsements when it arrived in my household, I had very high hopes for this novel. I was fortunately not disappointed.

At over 400 pages, with very small writing, this is a somewhat epic tale that spans most of the 20th century and many places from Cape Breton Island in Novia Scotia to New York City as it tells the tale of four sisters. It starts with the elopement of an 18-year old piano tuner named James with 13-year old Materia; the initial love quickly turns to dislike as James struggles to cope with her Lebanese heritage. He is consoled when their first child Katherine is born - an absolute beauty who also proves to be a wonderful singer, but eventually tries to escape, enlisting and fighting in WW1. Two more children follow, Mercedes and Frances, and then as Katherine dies, there is a fourth, Lily. But James and Materia's relationship remains hugely dysfunctional and abusive and it is the relationships between the sisters which hold the family together.

The only thing that I struggled with in the novel was the movement backwards and forwards in time; whilst it enabled Macdonald to build up the tale in a more subtle fashion, I felt that it wasn't quite the right way to develop the story of the sisters and would have preferred a more linear approach. Sometimes the motives of the characters are not obvious and I felt a little confused trying to work out what had happened.

The prose is descriptive, with quite a dreamlike quality, and I am sure that it is this, along with the compelling storyline which gained it its longlisting for the Orange Prize in 1997.

Has anyone read any other books by Ann-Marie Macdonald? This was her first, but I see from Amazon that she has also written The way the crow flies (with 10 5* reviews).

Many thanks to Fiona from Vintage for sending me this book.
Posted by verity at 17:00