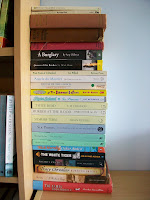 It's been a while since I've shared a picture of my TBR, and as it had to move home recently, owing to the chronic shortage of shelfspace at the cardigan residence, I thought it was time to share it with you. It's now a stack of 24 books*, a far cry from the days of last summer when it took up not just a shelf but a whole bookcase. Judicious weeding and focussed reading during my book buying ban at the end of last year got it down to more manageable proportions, but nevertheless there are some books on the pile which have been languishing for quite some time and which I hope you might convince me to read. However, I do save books for holidays, and as I have a weekend away in Cornwall in July and a week in the Lakes in September I shall probably save some of the most attractive ones for then.

Starting at the bottom...
* I picked up The camel bookmobile (Masha Hamilton)in a remainders shop last year - the title was appealing, but I've not got around to reading it.
* Sandy: the true story of a boy growing up in Cornwall in the late 1800s was a title that appealed to me for its Cornish connections - I think I read about it on Fleur Fisher's blog. Will probably save this to read around the time I go to Cornwall.
* I got this copy of Burning Bright for 2.99 with The times over 2 years ago; although I've enjoyed some of Tracey Chevalier's novels, this one hasn't appealed to me so much, I think because I don't know much about the period in which it is set.
* Fugitive pieces (Anne Michaels) is one of those books that I feel I ought to have read, and picked up in a charity shop for that reason. As it won the Orange prize, I really should get on with it for my Orange Wednesdays theme. Another one that has been languishing for some time.
* The white tiger was another Times book offer, and is another book I feel I ought to have read, but somehow never seems to appeal enough to make its way off the TBR - and has thus been waiting for over a year.
* I bought Nick Hornby's Juliet Naked a while ago and am sure I will enjoy it - it is the perfect holiday reading material, and I took it on my last holiday, and it was just bad luck that I didn't get to it then. Definitely this year!
* The next two books are Capachin Classics, The green hat (Michael Arlen) and The green child (Herbert Read). The first I won in a giveaway from Hannah Stoneman and the second was kindly sent to me from Capachin to review.
* Six ponies (Josephine Pullein-Thompson) is a recent republication by Fidra books, which I discovered was the prequel to a favourite trilogy of horsey books (Pony club challenge/Pony club team/Pony club cup) and I am looking forward to meeting some favourite characters again.
* The next three books are the latest Greyladies titles; these make exceptionally good holiday reads.
* I like to keep up with current children's fiction, and Skate school was a title I happened on in Oxfam - it seemed to be a modern variation on the boarding school story.
* The summer before is a newly released prequel to the Babysitters Club books which I am currently rereading, and so this will be a fun complement to that. Am not sure whether to read it now, or when I am done rereading the older books that I bought recently.
* South of the lights (Angela Huth) was something I picked up in Oxfam as a treat for having to work on the Bank Holiday. I've enjoyed most of her novels but hadn't come across this one, and find her relaxing and fairly undemanding.
* I was bowled over by Angela Du Maurier's Treveryan at Easter, and when I discovered that another of her novels was still in print, I had to order it. The road to Leenane isn't set in Cornwall but Du Maurier has plenty of Cornish connections and I am hoping for another intensely gripping read.
* First term at Cottisford is a school story from Bettany press who specialise in republishing books for fans of British girls fiction. I am sure I will have a treat in store here.
* The next two books were sent to me earlier in the year by Honno Press for review, and seeing them there reminds me that I must have a look at them so that I can write about them here. They are A burglary and Queen of the rushes. Both look fascinating and I have no excuse for letting them linger in this pile.
* I thought I had read all of Monica Dickens books, but it turns out that I haven't; I've still got The fancy, which I bought from ebay recently. As this really will be my "last" Monica Dickens, to save or not to save is the question.
* Simon from Stuck in a book recently lent me Miss Matty which he had written about on his blog; having enjoyed that, he kindly lent me 2 more Richmal Crompton books. I do love her adult novels, although they are very hard to find, for their discussion of family life and emphasis on domesticity. There are definitely similarities with Monica Dickens.
* Finally two childrens books which I picked up in a charity shop, just because they were by authors I hadn't come across and which I thought would get to have a look at when I fancied something gentle - Ponies plot (C Northcote) and Private keep out (Gwen Grant)

Phew! Along with my library books and VMCs I am quite well provided for...

* I do also have a separate pile of Virago Modern Classics TBR, which numbers around 10 books at present, but I keep them separate to make things less overwhelming.
Posted by verity at 17:00