A box of Bloomsbury Group

Actually, they came in a very large padded envelope, but I was extremely excited to recieve all four of the new Bloomsbury Group titles. Last year's publication of 6 "lost classics from the early twentieth century" was one of the most enthused about events of the year on book blogs and I saw many reviews of the books. I'm lucky enough to see this year's titles before their publication and can participate even more fully in the excitement - I should say that above all, regardless of whether or not I liked the books, it is the principle behind the books that excites me - the desire to bring back books which would otherwise languish forgotten. This seems to be a trend for the 21st century in publishing and many of the best books that I have read in recent years. I was going to write about all of them in one go, but that would make for a very long post, so I will wet your appetite with one today and write about the rest very soon - my reading ability has just recovered enough to cope with them and fortunately they are reasonably light. 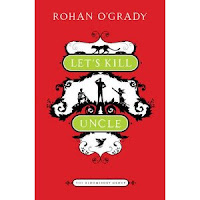 I started with Let's tell uncle by Rohan O'Grady*. I chose this one because out of the four, its author was the only one that I had not encountered before, and it was the only title that I have yet to see mentioned and I wanted to have a chance to read it before I read any reviews or hype about it. According to a note at the beginning of the volume, Rohan O'Grady is the pseudonym for June Margaret O'Grady; she was born in Vancouver and produced five novels, of which Let's kill Uncle, written in 1963, was her third.

Set on a remote island in Canada, the book revolves around two children, Barnaby and Christie who are visiting for the summer. Barnaby is somewhat of a tearaway; Christie is thin, quiet and reluctant to interact socially. But encouraged by those looking after them, they become friends, playing pranks on the villagers and enjoying what seems to be an idyllic existence. But it isn't. Barnaby is heir to a large fortune, and believes that his uncle is after his inheritance and trying to kill him. What is he to do when no-one believes him? Christie is the one who comes up with the answer - Barnaby will have to kill his uncle before his uncle kills him...

I'm not sure whether this book, entertaining and dark by turns, was originally written for children or adults. Like last year's Bloomsbury Group children's book (A kid for two farthings) it is captivating and written in a way that makes me think that it would probably appeal to both groups alike, although it is a more substantial read and at terms disturbing. Also apart from a beautiful preliminary page, there aren't any pictures in the book (which is a shame, I think that there is a lot of potential for illustrating this tale). I think this would make an excellent book to read aloud to an older child/pre-teenager; I would have enjoyed listening to my Dad read me this and would probably have needed the reassurance of having it read to me.

There is also a movie, quite old, made in 1966, which I would be curious to see. Wonder if this republication will prompt a remake?

*As an aside, I think the title alone is extremely entertaining and am contemplating giving it to one of my fiance's nephews as a joke present sometime!
Posted by verity at 08:00