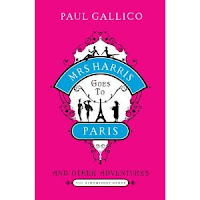 Originally titled Flowers for Mrs Harris, Mrs Harris goes to Paris by Paul Gallico, is another one of the Bloomsbury Group books published this summer. I think this was the title that most intrigued me from this summer's titles, partly because I knew that my friend Claire was one of the people who had suggested it to Bloomsbury for republication, but mainly because I had only encountered Paul Gallico once before in his novella The snow goose. This beautiful tale had me in such floods of tears aged eleven that I have been unable to read the book since. I knew that Mrs Harris was supposed to be an entertaining and enjoyable read and thus completely different to The Snow Goose.

From the start I was absolutely captivated. Mrs Harris, or rather Mrs 'Arris as she tends to think of herself, is a cockney charlady with a number of clients who she "does" for. One day she espies a beautiful Dior dress in the wardrobe of one of these people; a vivid contrast to her drab existence:
"Mrs Harris had always felt a craving for beauty and colour .......she stood before the stunning creation hanging in the wardrobe and found herself face to face with a new kind of beauty - an artificial one created by the hand of man the artist, but aimed directly and cunningly at the heart of woman. In that very instant she fell victim to the artist; at that very moment there was born within her the craving to possess such a garment"

Whilst doing the football pools one day sometime later, she has a premonition that she is going to win, and the yearning for the Dior dress comes back to her. She knows that when she wins she will be able to go to Paris and buy her own dress. Amazingly, she does win on the pools, but only £100, not even a quarter of the money she needs. But she sees this as a sign that she is meant to have the dress, and starts scrimping and saving. Finally she has enough money to go to Paris, where she does indeed get her dress but at the same time becoming involved with a cast of Parisian characters. The book began to remind me of Winifred Watson's Miss Pettigrew Lives for a Day; the ordinary person who has a wonderful adventure, developing in the process, but also touching other people's lives and changing them. She returns to London certainly changed by the experience, which turns out to have been so much more valuable than the dress itself. There is then a fantastic little twist in the plot towards the end which had me gasp out loud in shock; I want to say more about this episode but I don't want to spoil it!

After enjoying Mrs Harris goes to Paris so much I wondered what I would make of Mrs Harris goes to New York, the second Mrs Harris book which Bloomsbury have also released in this volume. I wondered whether or not any sequel could match it; a different story about the same woman might just be dull, and if it was too similar to the first book then it might not be so refreshing. Fortunately, I also enjoyed Mrs Harris goes to New York, a completely different but equally captivating read. This sees the indomitable Mrs Harris accompany one of her cleaning clients who is relocating to New York to settle in, but also using the opportunity to right a situation which has been on her mind for some time. The wonderful Dior dress makes an appearance too, being worn to dinner on the voyage over! Like the earlier book, I was gripped by Gallico's writing, finding it impossible to put the story down.

These hugely entertaining novels were so different from The Snow Goose that I'm wondering about the rest of Gallico's work - is it more akin to Mrs Harris or The Snow Goose or is it different again? But definitely one of my favourite reads of this year, and one that I'd recommend as something a bit different for a summer read.

And finally, I'm now extremely keen to read the rest of Mrs Harris' adventures - Bloomsbury please can you bring out Mrs Harris goes to Russia and Mrs Harris MP next summer please? As I commented on Elaine's blog about the same book - I'll camp out on their doorstep until they do!
Posted by verity at 17:00