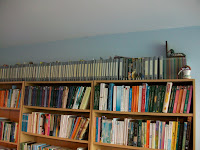 Last year during Persephone Reading Week I wrote a post called My Persephone Life in which I described how I became a Persephone enthusiast. I have to say that since then my enthusiasm has only been increased, as has my collection (as Darlene commented on that post - "Once you've read your first Persephone I think it's safe to say you'd better clear a shelf on your bookcase for more"), as you can see if you compare the above photo with the one in the post last year (a couple are on loan to people so it is not my complete collection) ! By the end of this Persephone Reading Week I intend to have read all of the Persephone books - I just have three non fiction titles to go, plus The hopkins manuscript which I plan to take on the bus trip to London for the bloggers meet-up at the end of the week.

It's then going to be time to reread some of my favourites. Top of my list is the first Persephone book that I ever read, Family roundabout, as it must be at least eight years since I read it. I'd like to revisit Mariana too and some of the Dorothy Whipples which I read comparatively early on.

But what has been my favourite overall? I have been pondering this over the last couple of days as I have been reading various reviews. Many of the same titles seem to be popular among bloggers, particularly the Whipples and Laskis. Other titles such as Cheerful weather, Mariana and Miss Pettigrew are also often mentioned - all of which are Persephone Classics. I wonder whether it is because they are popular that they were chosen to be classics or whether it is because the classics are more widely available (particularly in the US and UK bookshops).

I think my favourite Persephone reads have been some of the books which are less frequently mentioned. I was absolutely bowled over by The world that was ours last December, and I thought that Nicola Beaumann's A very great profession is a fabulous read that sets the books of the Persephone phenomenon into historical context. Round About A Pound a Week is a key historicla text because it was so critical in contributing to the debate about the need for social reform at the start of the twentieth century, and gives an absolutely fantastic insight into the world of the poor. A London Child of the 1870s is a book that I have loved for years, long before its Persephone incarnation, but worth mentioning for that! Of the novels, I have especially enjoyed A fortnight in September, Miss Buncle's book (which I recommended in the Bookseller back in December), and Princes in the land. Dorothy Whipple's short stories forced me to reconsider my dislike of the genre, although I have yet to read any short stories that I have enjoyed as much as those. Ultimately one of my very favourites has to be Bricks and Mortar by Helen Ashton.
Posted by verity at 08:00