I've had a huge number of acquisitions in the last couple of weeks, so I thought it was high time that I wrote about some of them. I've actually read my way through quite a few of them and I will be reviewing some of them in due course. 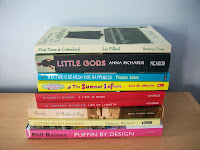 Puffin by design is one of the most exciting of my recent acquisitons. I'm sure most readers will know the fantastic Penguin by Design, and this book has been issued to celebrate Puffin's 70th anniversary. I was brought up on a diet of Puffin books - they published some absolutely wonderful reads - and this book charts the development of the imprint. It's a lovely book for browsing through. I should also mention that there is a new biography of Kaye Webb, the first editior of the Puffin books imprint, called So much to tell, by Valerie Grove which I am top of the waiting list for at the library, and also that Puffin are also going to bring out mugs! I am sure I will need a couple of those to complement my rather more grown up Penguin mugs.

Sandy, the true story of a boy and his friends growing up in Cornwall in the late 1800s is something that I read about on Fleur Fisher's blog, and thus decided to order from Amazon. Whilst Jane is lucky enough to have plenty of Cornish books available in her library (unsurprisingly since she lives in Cornwall) I have to resort to online shopping to fuel my interest in the county. Letters from Lameldra is another Cornish read that I got from the Cornish publisher Truran in their half price sale.

First term at Cottisford is a lovely republished school story by an author that I don't know at all, published by Bettany Press, whom I say more about a little further down.

Little gods was advertised on the back of the Guardian Review section last week and sounded intriguing; I picked up a second hand copy on Amazon.

Vintage Classics very kindly sent me two of their recent Vintage Classics editions - Liza of Lambeth and A time in Rome, which I will write about tomorrow. I do admire these handsome red editions.

Jackie from Farmlanebooks sent me Hector and the search for happiness - the title intrigued me and it has been mentioned a lot recently in the blogosphere. Jackie didn't enjoy it very much which was why she kindly let me give her copy a new home, so I am interested to see what I make of it - Jackie and I like some, but not all, of the same books so I will be fascinated to see if it is one that we agree on or not!

[Not pictured because I've lent it to my Dad] A colleague (possibly the worst influence on me outside of the blogs that I read, in fact, I think she is even worse than the blogs that I read) suggested that I read Christina Hardyment's A canary coloured cart : one family's search for storybook Europe. Having loved Hardyment's Captain Flint's Trunk, I need little persuasion when I heard that it was the book about her family's literary excursion around Europe in a camper-van in the 1980s. This is definitely one that I will be reviewing very soon.

I've also ordered, but am still waiting for, two more Greyladies titles to add to my collections. I was lucky enough to get a very generous booktoken as a belated leaving gift from my Saturday job. Book tokens however are quite difficult to spend; I don't like to buy full price books in bookshops when I can get them on Amazon for less or second hand. Most of the books that I buy new, at full price, are from independent publishers. Blackwells were singularly unhelpful in helping me spend it, but Rachel at The Woodstock Bookshop has been wonderfully helpful. Although she was unable to get two of the titles I wanted, she managed to order the Greyladies for me, and has also ordered me two Girls Gone By titles which are coming out later in the year. I'm glad to give my custom to a reliable

On the theme of ordered-but-not-quite-acquired, I did treat myself to the two books that I couldn't get with my book token, both published by The Bettany Press. This imprint is a bit like Girls Gone By, in that they specialise in books for fans of British girls fiction. I was pleased to discover that they have republished two books by Elinor M Brent-Dyer which I had not come across - Jean of Storms (a discovered adult novel), and The school by the river, which is apparently loosely connected to the Chalet School series. I can't wait for these two to arrive! 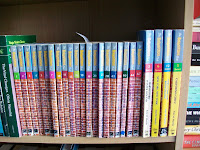 I've also acquired a large number of Babysitters Club books over the last couple of weeks. I read these as a child and spotted a big collection in Oxfam a few weeks ago. I've been backwards and forwards buying a couple at a time, and I've also been on ebay picking up some cheap sets. They're not in any sense literary, but I have found reading them (it turns out I don't think that I read very many at all as a child) extremely comforting over a couple of quite stressful weeks - it is nice to have a book which you can read in twenty minutes at the end of the day without any effort at all and to know that everything will turn out ok at the end! I was very excited to discover that there is a new prequel to the series, which is just out, by Ann Martin called The summer before - I've not yet read that, but you can spot it in the acquistions picture above.
Posted by verity at 08:00