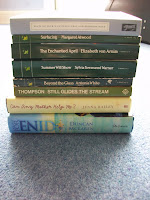 I can't resist sharing the finds that I made which cheered up an otherwise grey and sickly feeling Bank Holiday Saturday. The highlight was the book at the top of the pile - Plats du jour - which is one of the few Persephone books that I don't own, and the only one that I hadn't read of those that I didn't own (9 more to go for the complete set!). I couldn't believe it when I saw it for £3 in Oxfam! Also in Oxfam I picked up the rather lovely original green edition of An enchanted April which I already owned in the new edition (equally delightful so won't be parting with that). At £2.99 it was the greatest expense of the outing, but worth every penny as is in lovely condition. I then went on to a new bookshop which I've not visited before, called The Albion Beatnik Bookshop (I think) which had a wonderful mixture of new and second hand books - I avoided the new ones although it looked like an excellent selection, but spotted an original green Virago edition of Margaret Atwood's Surfacing for £2. I then went over the road to The last bookshop where everything is £2 and picked up the two hardbacks at the bottom of the pile, both of which I've read and liked enough to want to read again - and Can any mother help me? and Looking for Enid which is the slightly silly tale of a man's investigation into Blyton's life. On my way home, I called in at the Mind Charity shop, where I found an immaculate copy of Sylvia Townsend Warner's Summer will show - I haven't yet "done" Warner for my Virago venture. I was then tempted into getting Still glides the stream which is one of FLora Thompson's later follow ups to her Lark Rise Books - my father owns this in a hardback, but the Oxford paperback edition is equally wonderful and certainly one for my collection, as well as Beyond the glass by Antonia White. I already own her Frost in May quartet in the more modern editions, but as she is the first Virago author I think it would be nice to have a set of her in green, and as all of the Mind purchases were only £1.20, it didn't break the bank.

What have you been purchasing this Bank Holiday?
Posted by verity at 16:03