A foray into the domestic arts (part 1)

Back in January I decided to take up knitting. This was something I did as a child - knitting long, holey scarves for my cuddly toys - but had not done in at least a decade an a half. My decision was prompted by spotting the pattern for a very pretty little flower corsage in a magazine - I wanted one myself, and thought that they would make excellent birthday gifts for my friends. Unfortunately, I had almost completely forgotten how to knit. A knitting book from the library later, a trip to a knitting shop for needles and wool, and I realised that perhaps a flower corsage was a tad ambitious. So, I decided to start by knitting a dishcloth; I have a very eco-friendly friend who I thought would love a dishcloth for her birthday, so I chose an attractive shade of pink and congratulated myself on the fact that I had five months to finish it. It was slow progress - I found knitting very very tiring at first, and combined with my tiredness at starting a new job and ongoing health problems, it was soon abandoned. A fortnight ago, I realised that my friend's birthday was in just a week's time, and guiltily took up my needles. Unfortunately, despite knitting hard, I didn't manage to finish it in time (she got some rather yummy books instead, lucky girl), but a week late, I did eventually cast it off. And here it is - some dropped stitches, a bit wonky, but actually something I'm quite proud of. And at least it's not too nice to use :) 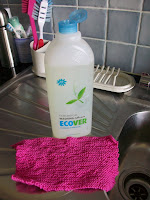 My next project is to learn how to do purl; a colleague tells me that dishcloths or scarves are definitely the best way to practice, so maybe my friend will get another cloth in time for Christmas. My colleague has promised to show me how to do that, and also to translate the original corsage pattern for me. I am confident that I will get there eventually!
Posted by verity at 11:30