At the beginning of the year, I spotted this meme on Stuck-in-a-book, and then almost every book blog I read (well, it felt like it anyway!). It's probably a bit late to jump on the bandwagon but it was so interesting to read about the books which people chose that I thought you might like to see mine too.

(The original instructions for the meme are:
1.) Go to your bookshelves...
2.) Close your eyes. If you're feeling really committed, blindfold yourself.
3.) Select ten books at random. Use more than one bookcase, if you have them, or piles by the bed, or... basically, wherever you keep books.
4.) Use these books to tell us about yourself - where and when you got them, who got them for you, what the book says about you, etc. etc.....
5.) Have fun! Be imaginative. Doesn't matter if you've read them or not - be creative. It might not seem easy to start off with, and the links might be a little tenuous, but I think this is a fun way to do this sort of meme.
6.) Feel free to cheat a bit, if you need to...)

I'm afraid that I shamelessly chose all of mine...here they are... 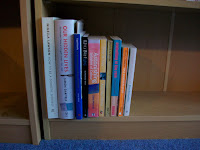 and this is what I have to say about them.

How to be a domestic goddess (Nigella Lawson)
Regular readers will know that I love baking, and I have found much inspiration from this cookbook full of wonderful things such as these muffins. I aspire to being a domestic goddess, and feel that being able to make tasty cakes and biscuits and keep the house tidy is an important part that I have to play in the relationship I'm in.

Our hidden lives (Simon Garfield).
My first degree was in history, and whilst studying I developed a huge interest in the social and domestic history of the Second World War. I found out about the Mass Observation Archive from which these diaries are selected and have loved reading people's accounts of life in wartime Britain. I was not a distinguished scholar at university, but I did win a "Collection Prize" for an in-house exam on my WW2 paper, and it was with the book token I recieved that I purchaed this book.

Liquid Assets (Janet Smith)
Some of you may know my penchant for swimming, and in particular swimming outside. From an early age my Mum spent many summer days with me at an outside swimming pool and I am sure it was this which makes me feel so holidayish when I get to swim in an outdoor pool. In 2007, my partner and I tried to swim in as many different outdoor pools as possible; I think we managed about 15.

White bird flying (Nicholas Orme)
My father is a historian with a number of erudite history books to his name, but when I was small, he also had a book of children's short stories published (in fact, it was taken on by the Longman's Books for Schools project and is probably his bestselling work as it got sold to schools across the country). Before it was published, he appointed me to be his "publisher's reader" and say whether or not I thought it should be published! Unfortunately, Longman's wouldn't let him include a dedication, but luckily the main character in one of the stories is called Verity.

Astonishing splashes of colour (Clare Morrall).
I have only been given a handful of books in adult life, mainly because people worry that I will have already read what they choose, and this is one of them. I hadn't heard of it before I was given it and really enjoyed it, so it proves that it is worth taking the risk! It was a 20th birthday present from a friend who is no longer alive and hugely special. Incidentally, the author went to the same school as my friend and I!

Frost in May (Antonia White)
Some of you may have seen my other Virago Venture blog. Frost in May was both the first Virago Modern Classic, and the first one that I read..

Vanishing Cornwall (Daphne Du Maurier)
This book is no surprise to those of you who know how much I love Cornwall. I spent so much time there on holiday in my childhood and teens. This book is special because it combines my favourite place with one of my favourite authors.

Sunbathing in the rain (Gwyneth Lewis)
Subtitled "A cheerful book about depression", I was lent this in 2003 when I was extremely ill with depression. The book showed me that other people suffered from depression too, and that it was ok to feel like that. Hugely affirming for me at the time, I occasionally like to revisit it to remind myself how important it is to stay well.

One pair of hands (Monica Dickens)
I am a big fan of autobiographies, and I think that this started with this book, which was on the shelves of the flat we used to stay in in Cornwall. Every year as we arrived for our holiday, I would rush to check that this book was still there and reread it several times during our fortnight's stay.

The school at the chalet (Elinor M Brent-Dyer)
It seems strange that only one of these ten books is a children's book but this book is important for a number of reasons. It was a present from my Mum when we went to Austria for the first time, aged 8, and it was fantastic to be able to read a book set in the place we were visiting, sparking off an interest in "themed" literature. This book is the first in a series of over 60 books, and later in my life it provided my first impetus towards collecting, as I tried to obtain a complete set of the series (I was successful, but only by mixing different editions).
Posted by verity at 17:00