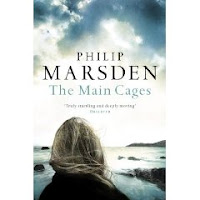 The first proper novel I read as part of my Cornish inspired reading was The main cages by Philip Marsden. I had not heard of Philip Marsden before, but according to the blurb on the fly leaf he is an eminent writer, predominantly focussing on travel writing, Fellow of the Royal Society of Literature and winner of the Somerset Maugham Award. This is his first novel.

Set in the 1930s a small Cornish village near Penzance called Polymayne, the Main cages is a book framed by a group of perilous rocks outside Polmayne. It starts with a tragic shipwreck on these rocks and their presence hangs over the entire tale. In between Marsden paints a picture of the community and its characters; the fishermen, the hoteliers, the painters, the visitors on holiday. We follow the main character Jack Sweeney, a newcomer to the town as he falls in love with an artist named Anna. But given the opening of the book and the oppresive presence of the rocks, the whole tale is overhung with a sense of foreboding.

"Even in this deadest of dawn seas, the Main Cages picked out a swell where there appeared to be none. It came in from the east, each wave mounting as it approached the first of the rocks, the Curate. The crest steepend and began to curl, and just before it broke, the water was sucked away from around the rock and it was exposed, a brief black island hung with strands of draining white"

I loved his particular style of writing which felt almost like a medieval chronicle in places. Individuals were sparsely introduced and events related in a bare fashion before being fleshed out with more detail. It was also interesting to read a tale of the 1930s; often books set in this time have the threat of war hanging over them, but this didn't, and this may actually reflect the experiences of the ordinary people of the time.

I'm not sure whether I would seek out more works by Marsden because I liked this best for being a book about Cornwall but it was certainly a good way to kick things off. 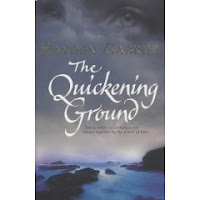 Another suggestion from Fleur Fisher, The quickening ground was an immensley enjoyable Cornish read, telling the story of two women, 100 years apart who inhabit the same farmhouse near Newlyn. Claira in 1886 has just moved in after getting married to her husband, and Claire in 1986 has moved in after her family decide to leave their city existence for a less stressful life near the sea. The pair's lives intertwine after Claire discovers a nineteenth century painting from the local Newlyn school. It's a cleverly written story that kept me guessing up until the end.

But the reason I read this book was for its connection with Cornwall, and I wasn't disappointed in that either. The story itself might not be a new concept, but the descriptions of Cornwall are beautiful.

Summer in February seemed like an appropriate read for this time of year, but turned out to be even more timely than I had anticipated given my reading of Laura Knight's autobiography earlier on in my Reading Cornwall adventure. This is a beautifully told and meticulously researched book about the community of painters in Newlyn and Lamorna before the First World War. Characters such as Laura Knight and Alfred Munnings feature. Ultimately, it is a love story following what happens when two of the men fall in love with the same woman, but it is so very much more than that, detailing the lives of the characters, and describing the wonderful landscapes. I read on the internet that there are plans to make this into a film and think that this would be fantastic!