I was absolutely overwhelmed by the response to my post last week about my plans to read plenty of Cornish books this year, so thank you to everyone for your suggestions. Fleurfisher has put together a wonderful list of ideas giving me even more inspiration, and I've made a list in a notebook of the titles that I definitely want to read. I've read quite a lot of Cornish books already, so at some point I think I will make a list of those for "completeness" sake. I am so very excited about it that I think there will be posts on this theme far more regularly than once a month, perhaps even once a week in the next nine weeks running up to Easter, which I am spending in the county.

I decided to kick off with a film rather than a book. I found a good long list of films made in the county, some of which I'd seen (Saving Grace, Ladies in Lavender, Rebecca, Jamaica Inn), some which didn't particularly appeal (Straw dogs, Johnny English), some which are completely out of print, and some which are on the "wish-list" of films I'd like to see: Amy Foster, Next of Kin, Johnny Frenchman. I have long been a fan of the Wycliffe tv series, and wish that they would bring them out on DVD, and I'm wondering about getting hold of Doc Martin, since that was partly filmed in Port Isaac which is very close to where we will be staying at Easter. 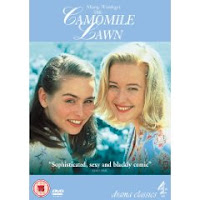 A trip to the library enabled me to borrow The camomile lawn, which is an adaption of the book by the same name by Mary Wesley. It was originally a television drama, and for my £1.25 rental fee I got 264 minutes of watching. It's been a while since I've read the book so I can't comment on how faithful the adaption is, but it was most enjoyable. Set mainly in Cornwall, on and after the eve of the Second World War, the drama tells the story of the Cuthbertson family - an aunt, uncle, cousins and an orphan, and some of their neighbours and how they are affected by the arrival of the war. They are all from the upper middle class, and from the richer section of society. Some of the book is set in London, reflecting their wartime experiences. There is love, drama, relationships and above all the lifechanging experience of living through the Second World War.

If I'm honest, the coastal scenery could have been anywhere, and not specifically Cornwall, although it was filmed in Veryan and Portloe (admittedly areas that I am not familiar with). But the period detail, especially in the parts filmed in London is fantastic - if you like wartime dramas then this is also one for you. The excellent cast includes Felicity Kendal and Paul Eddington (familiar from The Good Life, although here they are married rather than neighbours), Tara Fitzgerald (another favourite of mine), and Jennifer Ehle.

I'm not sure which of Mary Wesley's novels are set in Cornwall, but I have discovered that she wrote a book called Part of the scenery, which is about the Westcountry region and her life, and have reserved this at the library. More on that in due course I expect!

Anyway, do let me know what your favourite Cornish films and television are, I'd be fascinated to know if there is anything else that I'd like that I might have missed.
Posted by verity at 08:00