Fleurfisher mentioned The magic of a line, the memoirs of Dame Laura Knight, when she brainstormed ideas for Cornish books and I was immediately intrigued as I am familiar with Dame Laura Knight as an important war artist during the Second World War, producing paintings such as the one above to help maintain morale.

The memoirs are certainly interesting, although obviously written by an artist rather than a writer. We learn about Laura's early life, and having to go to university at the age of 13 to tran to be an art teacher due to impecunious family circumstances. There is some interesting information about being an artist, and the edition of the book that I borrowed from the library was heavily illustrated with wonderful plates of her drawings. The range of her work was extremely broad; in addition to war artistry, she also did a lot of painting of dancers such as Pavlova. The book also tells the story of her friendship and subsequent marriage to the artist Harold Knight.

Laura and Harold went to Cornwall after hearing that it had light that lasted longer than anywhere else in the country, obviously important for an artist, and settled briefly in Lamorna. There is unfortunately only really one chapter in the book that touches on their experiences in Cornwall but a lot of what she said about Cornwall rang true.

Towards the end in a "retrospective" on her life she writes:
"Cornwall is not like any other sort of country-it's no use trying to comapre it with any other place. There are times when you think everything is quite ordinary; and there are times when you feel you are not properly you, but someone else whom you don't in the least know; and an atmosphere prevails which takes away any sense or belief you have ever had, and you don't know why, but you aren't in England any more" 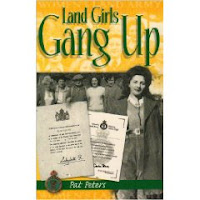 After reading a review of Land girls gang up by Pat Peters in Cornwall today, I was keen to add this to my collection of Cornish memoirs. Although again not hugely literary, this is a fantastic story of the misadventures of some girls who go from London to Cornwall to be land girls during the Second World War. Long days, back breaking work, and little social life weren't easy but there were humorous events too, such as when the girls opened their packed lunches on the first day...
Taking a half moon shape from her food box Nell exclaimed "I've got a bleedin' piece of pie crust!"
"Don't be a chump, it's a pasty and its filled with something" Pauline told her.
Jackie eyed her half moon with suspicion before breaking it in half. Jame spilled from the pasty onto her dungarees "God how I hate jam"...
Those who had pasties were to find that something was almost anything. Kay and I found ours to be filled with potatoes, meat and onions while Pauline and Phyllis's held egg and bacon. Bunny's had apples and Jimmy waved hers aloft proclaiming "currants!".
Set in and around areas that I love in North Cornwall, it was interesting to have a historical perspective on what to me are holiday destinations.
***
Another set of memoirs which mention Cornwall briefly are those written by Molly Hughes, starting with London Child in the 1870s. This is the first in a series of wonderful autobiographical books by Hughes, the first of which has recently been republished by Persephone books. Hughes also wrote Vivians, a tale of her Cornish ancestors which is mainly set in Cornwall. 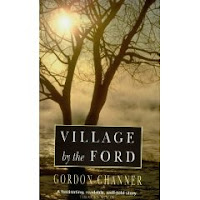 I then read Village by the ford by Gordon Channer. This is the story of a family who leave their life in a city to set up a caravan site in a wild valley in South Cornwall. A quote on the back of the book compared it to A town like Alice; I thought this was stretching it slightly. It's an entertaining story, but not hugely literary. Channer has written three more books about the adventures of the family, and although I won't rush to read them I'd be interested to find out how it all pans out! 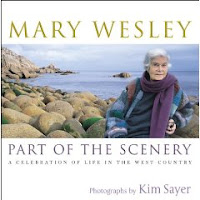 I spent a lovely evening with Mary Wesley's Part of the scenery which is partly memoir, partly description of life in the Westcountry, and partly photographic illustration. Although its remit goes beyond the Cornish county, as as Devon-baby I was interested to read about other places that I know. Mary Wesley confesses in the text that she can't really remember which locations inspired her books, often they are a mishmash of several places that she knew. But I was tickled to find that like me she spent her childhood holidays in Polzeath, although this was many years earlier than I did, during the First World War. The wonderful photographs by Kim Sayer really complement the text and make for a virtual holiday.

***
Memoirs which deal more overtly with Cornwall which I have read are Myself when young (Daphne Du Maurier), A Cornish childhood (A.L. Rowse), Kisses on a postcard (Terence Frisby), Great Western Beach (Smith), We bought an island (Atkins) and its sequel Tales from our Cornish Island)

***
Another memoir that I intend to read is Schoolhouse in the wind (Anne Treneer). Does anyone have any other recommendations?