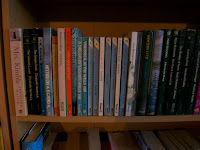 After going to two ballets in the space of two weeks (Tales of Beatrix Potter/Les Patineurs and The Nutcracker), I had a real desire to re-read some ballet books. Ballet books were one of my favourite genres as a child, starting with Ballet Shoes, and other Noel Streatfeilds, but also covering other authors such as Lorna Hill and Rumer Godden and Dorothy Richardson. For some reason it was Lorna Hill that I wanted to turn to, and although I had the first two titles of her "Wells" series, I had read them quite recently. It was not therefore surprising, that in an idle moment I found myself investigating the books on Amazon marketplace, and not long before I had bought most of the collection (see below for the full list)

I found that the first four books in the series are relatively easy and inexpensive to obtain, the next six relatively easy to obtain (although I did not manage to get them all in the blue Piccolo editions that I remember reading as a child) and the last four virtually impossible to obtain.
Girls Gone By Publishing have published the last four books, but unfortunately these are now out of print. I have managed to find copies of two of them (beautiful editions featuring the old dustwrappers), so I am only missing the last two titles of the series - Vicki in Venice and The secret, but these will be expensive, so they are definitely wish-list titles for the future.

I love the idea of these books, the concept that ordinary girls can pursue their dreams and become ballerinas. How many little girls don't want to dance? Every time that I see a ballet I am overcome by the beauty of dancing and wish that I had kept up my ballet lessons for longer than a term. The ballet is also hugely romantic, and I am very lucky that my partner also likes the ballet and that we can go together.

My shopping also led me to the discovery that she has written some other series, including another ballet series called The Dancing Peel books. I ordered a couple of these to sample as well. She also wrote some non ballet books which I would love to see and a handful of books for adults.

As we have three more trips to the ballet lined up between now and the end of March (Romeo and Juliet this Saturday, Cinderella and La Fille mal gardee (all ballets which I have not seen before), I am sure that I will enjoy indulging myself in these comfort reads.

Are there any ballet books that you loved as a child?