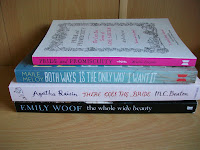 I recieved three review copies in the mail last week, and having excitedly read my way through them, I thought I would mention them on my blog while they were still fresh in my mind.

The whole wide beauty (Emily Woof)
I recieved this book through the librarything.com early reviewers programme which sends out proof copies to members to review on the website. What a privilege it was to have the opportunity to read this book ahead of publication. Although a debut novel, The whole wide beauty by Woof is an incredibly accomplished novel dealing with the big issues of life - the need to love and be loved, the problem of conflicting roles and interests and the need to find fulfilment. It's the story of a woman named Katherine Freeman, an ex-ballet dancer who now lives with her overworked husband, young son and works part-time as a music teacher. Her life suddenly changes when she meets a poet at an arts event organised by her father, and they embark on an affair, trying to fill the gaps of love and intellectual fulfilment in their lives. Emily Woof is better known as an actor with an long list of film and theatre credits to her name; however this is an impressive novel and I hope that she will be writing another.

Pride and promiscuity
There seems to be a huge number of Jane Austen spin offs of late, and this book, sent to me by Canongate, is among them. To be honest, I wasn't grabbed by it. The basic premise of the book is that a Jane Austen scholar finds some lost Austen manuscripts containing sex scenes, which got left out of her finished publications and shed a whole new light on the author. It is obviously a parody, but I found the sex scenes badly written (see this interesting blog post by Jackie about sex in literature), and for me it didn't add anything to a Jane Austen experience.

Both ways is the way I want it (Meloy)
Having loved both of Meloy's novels, Liars and Saints, and a Family Daughter, I was excited when Canongate sent me her latest. Unfortunately it turned out not to be a novel, rather a collection of short stories, but having got into some short stories recently I was rather more open minded than I might otherwise have been. And I'm glad I did and I found it to be a great collection which makes me hope even more that Meloy writes another novel!

The first story was probably my favourite. It concerns Chet, who by accident ends up attending an adult education course in law. The tutor signed up to teach the class before getting a full-time job nine and a half hours drive away, but didn't want to let people down, so has driven miles to get there. Chet really wants to get to know her, and they bond in the cafe after the class. Even though he isn't signed up to the class, he returns the next session to see her and they go to the cafe again, even though she is exhausted. This happens one more time, and then he kisses her. The next class, she doesn't turn up; a man is in her place, she has found the travelling too exhausting. Chet drives 9.5 hours to try to find her, despite not knowing where she lives. He is scared that his kiss has scared her off. They meet, but she tells him she had already asked for a replacement but that she had not got around the mentioning it. Chet has little option but to drive home again; stories do not always have the happy ending.

I also recieved a copy of the latest Agatha Raisin book, There goes the bride, which I won on Simon S's blog. I've not read any of the Agatha Raisin books so it's nice to have the opportunity, though I'll be lending it to my Mum first as she's much more into crime than me!
Posted by verity at 17:00