I watched a hugely fascinating documentary on BBC4 the other night (which was in fact a repeat of a Christmas programme that I had missed) about the filmmaker Oliver Postgate, responsible for bringing us Bagpuss, The Clangers, Ivor the engine, and essentially setting out the ground for the children's television that is shown today like the Teletubbies, The Fimbles and In the night garden. I remembered seeing his memoir, and I was lucky enough to be able to obtain a copy from Canongate, who published it.

Postgate's memoir begins with a wonderful description of his upbringing in the interwar years, followed by a spell at art school, but it was during the Second World War that the book really started to get interesting for me. I wrote a little while ago about how I had written a dissertation on conscientious objectors during the First World War, and in fact one of the individuals that I focussed my research upon was his father Raymond. Oliver Postgate made a conscientious objecting during the Second World War. Although Raymond did not object to the Second World War in the way that he had to the First World War, he was still reasonably supportive of Oliver's objection, in a way that his own father had not been. I was fascinated by Postgate's description of trying to register his objection; he failed to report for duty, but nonetheless turned up to the barracks to report himself failing to report for duty. The authorities didn't know quite what to do with him! In the event after a spell in prison, he worked on the land for the remainder of the war.

After the war, Postgate followed a number of pursuits; he attempted to develop a career in theatre. But he also tried his hand in particular at invention. He made his mother a "washing machine" which terrified her, as the motor moved the box around the shed in which it was kept and she was scared that it was going to come to get her! He also made some props for theatre and television, such as an amazing collapsable souffle, which could be deflated by the actress using her thumb when she took it out of the oven. It is easy to see the person who was later to create the wonderfully inventive animations.

Postgate's television work and animations in collaboration with Peter Firmin was only dealt with towards the end of the book. Finding himself disappointed with current output, he came up with a number of ideas, but it was not until Noggin the Nog that they achieved success. Bagpuss, The Pogles, Ivor the engine, and of course The clangers all followed in due course. I loved reading about their creation from the creator himself! Being a huge Clangers fan I was especially interested in that section; I knew about the legendary episode which the BBC very nearly didn't show because they objected to Major Clanger swearing (for those of you who never saw them, the Clangers communicated by making whistling noises, but in order to make it authentic, scripts were written and then "whistled" on 6 special Clangers whistles by Postgate and Firmin), and I knew that it was possible to hear sense in the whistling noises, but I didn't know that, although the scripts were English, German and French viewers found the noises equally intelligible and believed the Clangers to be speaking their languages!

This book was actually originally written in 2000, but this new edition by Canongate was issued in 2009 after his death in 2008 and features a postscript by one of his sons. The book has wonderful illustrations at the start of each chapter by Peter Firmin, Postgate's collaborator on many series, and this hardback edition has a lovely embossed cover. I do really recommend this book as a hugely interesting autobiography and an absolute must-read for anyone who enjoyed/enjoys The Clangers, Bagpuss, or any of the other children's programmes.

(And as a post-script, here is my very own Clanger, which one of my college friends knitted for me several years ago after I spent a year wearing Clangers t-shirts and with a Clangers decorated bedroom!) 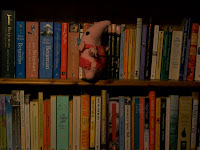