Although I usually tend to avoid crime books, I have made a bit of an exception over the last couple of weeks as there are a number set in Cornwall, and I have to admit to being pleasantly surprised at how much I've enjoyed this venture into pastures anew. I have not discovered great literature, but I have encountered gripping page-turners. 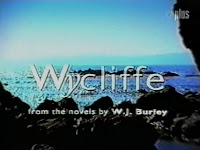 I'm not a complete stranger to Cornish crime; I was a devotee of the television series Wycliffe, broadcast in the 1990s, and often repeated on ITV2, for the scenery and wonderful opening music. I subsequently read a lot of the books which they were based on, although if I'm honest I never really enjoyed the books as much as the series.

However, a number of crime books and series were recommended to me when I embarked on this challenge, so I decided to dive in and sample some.

The first book I tried was Careless in red by Elizabeth George, recommended to me by EllenB. This got my attention because rarely for Cornish fiction it is set on the North coast as opposed to on the South coast, and this is the area with which I am most familiar and can picture most vividly (I think this is important in reading fiction by place...). Although reviews on Amazon are somewhat damning, suggesting that it does not live up to George's usual standard of crime novel, I did not have any preconceptions about it. The book opens with Inspector Lynley undertaking a walk along the coast path as part of the process of grieving for his wife; he has gone incognito, literally only in the clothes he is wearing, trying to find some peace. On his 43rd day of walking, he sees a climber fall to his death, and suddenly becomes embroiled in a murder enquiry. Although this story is the main driving force behind the book, there is a complicated cast of characters, the inhabitants of the nearby village, and George deals with family relationships making a much more complex story than I anticipated. I'm not sure that I would seek out more Inspector Lynley novels to read, but I did enjoy this one with its Cornish setting.

Various people suggested Janie Bolitho's Rose Treveylan mysteries. These are a series of detective novels set in Penzance. It would have been good to start at the beginning of the series, but the library only had Plotted in Cornwall on the shelves so I started 6 books in. I will definitely be requesting the others as I really loved it. It wasn't so much of a page-turning mystery as the Elizabeth George, but I liked it more for being a novel about a woman who is a painter and photographer and for being a book about the characters as much as the events. There was also a slightly smaller cast than in Careless in red which made it easier to follow. In some ways I found it reminiscent of the Veronica Stallwood books, set in Oxford, which are the only other crime novels that I have enjoyed previously. So, if you fancy a fairly easy read set in Cornwall with some elements of mystery and detection, then do seek this out.
Posted by verity at 08:00