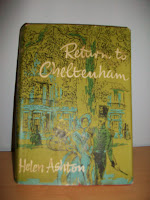 As part of Persephone Reading Week, I read Bricks and Mortar by Helen Ashton, which I greatly enjoyed. Having read my post about it, Simon from Stuck-in-a-book kindly offered to lend me another title by Ashton, Return to Cheltenham; it was especially kind as he has not yet read it. I was desperate to read it, and started it as soon as I got home (which rather put paid to my plans to catch up with library books over the weekend!)

It starts with a description of her childhood; living alone with her doctor father and aunt, she is first tutored at home, and then is sent to day-school aged 15. Her father remarries, but she is not hugely happy about the match. Aged 19, she leaves school, and despite her father's misgivings (he is a staunchly chapel man) she attends her first ball. She is asked to dance...by a handsome Irish soldier, Rory...and falls in love. After the ball, she is desperate to see him again, but her father and stepmother forbid any contact. They meet surreptitiously, but it is frustrating. Eventually Rory sends her a letter, saying that he must return to Ireland, but will she come with him? His Aunt has died and he must take over her estate.

"He wasted no time in it ; urged her to run off, said that he would arrange everything...next day was to be the day, she must come out of the back gate by the stable, at six in the evening, and he would be waiting for her. She must come to the library in the morning and make him some sign ; if she did not come with him, he would go alone and she would never see him again...that was how Ally got her first love-letter"

She takes the plunge, and they journey to Ireland. At first life there is strange, but enjoyable; she gets to grips with living in a much larger house and having much greater resources to draw upon, and loves being with her new husband and has a daughter. But the surrounding social conditions are very difficult; potato blight has struck and the surrounding area is hit by famine. When she makes contact with one of her former Cheltenham friends she hears that her father does not want to see her again. He dies, and Ally is devastated as she has always expected to see him again. She loses her second child after she becomes ill with typhus, visiting the workhouse to try to help the poor people. Her husband cannot really understand her sympathy for the poor, and this affects their relationship.

The title I am afraid gives something of the plot away; Ally does eventually return to Cheltenham. But I'll hope that you can find a copy of this title to find out why yourself. The ending had me in tears, as it was unexpectedly happy.

I don't think this book was quite as brilliant as Bricks and Mortar, which stands out for being such a novel book, giving an insight into architecture and the history of buildings alongside the plot. But I did enjoy the descriptions of Cheltenham, which is a place that I know fairly well, and the depiction of Ireland, and found it a wonderful story for the weekend. Here's on the lookout for some more Helen Ashtons.
Posted by verity at 17:00