Bake of the week : Coconut cake 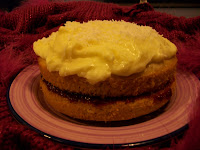 This week's bake came again from the BBC Good Food 101 Bakes and Cakes, and it was a seriously yummy Coconut cake. It was a coconut sponge; essentially a victoria sponge recipe with added dessicated coconut and some coconut cream, sandwiched with raspberry jam and topped with buttercream icing which contained more coconut cream. The recipe suggested putting buttercream in the middle as well, but here at the B Files, we have to watch our waistlines (or at least, my boyfriend does); it didn't seem to adversely affect the cake. I sprinkled the top with more dessicated coconut, but another time I think I'd actually put some in the buttercream.

Sorry for the slightly fuzzy photo, my blood sugar was very low when I tried to take the picture and my hands wouldn't stop shaking! I needed a piece of cake but had to try to photograph it first. The pink around the edge of the plate by the way is my new seriously funky pink scarf, bought for the cold fronts that have come in since last week.
Posted by verity at 17:32