All in the mind (Campbell) 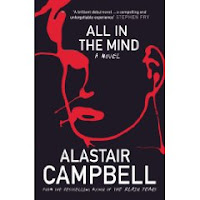 I've been a bit lax with regards to reading and writing about more recent literary fiction in the last couple of months; I've had several books on my library TBR pile, but apart from having read Notwithstanding, the majority of my reading has been concentrated on my Virago Venture.

However, I decided to rectify that this weekend, not least because a couple of the books could not be renewed any further. Unfortunately, things did not go quite to plan, (as Stuck in the book lent me a lovely old hardback, more of that later this week), but I did manage to read one book All in the mind by Alastair Campbell.

Campbell is better known for his work with Tony Blair and the Labour Party, acting as director of communications and strategy and then as a policy advisor, up until about 2005. Although it came out a while ago and I have been very keen to read it, it was only recently that I got my hands on a copy at the library.

All in the mind is a book about mental illness, a subject that interests me personally, as both I and a number of people close to me have suffered from an array of mental health issues. It is also a subject very close to Campbell and the novel draws on his experiences with depression and alcohol addiction.

It tells the story of several characters with mental illness who all visit the same psychiatrist, Professor Sturrock, over the period of a long weekend. We have Emily, the disfigured burns victim, ; Arta, a Kosovan refugee who has been raped; David, a man who has been depressed for so long that he can barely function ; Ralph, a politician who is struggling with alcohol addiction; Matthew whose wife believes he is a sex addict, but really just needs help sorting out his marriage. At the same time, Professor Sturrock is not without his own vulnerabilities. He recognises that he himself would score quite highly on his depression scale, and ultimately we see that he cares more about his patients' lives than his own life.

Despite its sometimes heavy themes, there were moments in the book where I laughed out loud, and I really enjoyed reading it. There were some interesting ideas too, such as the use of raisins to get Emily to come to terms with her disfigurement, and the use of an elastic band around David's wrist for him to flip every time he has a negative thought to try to encourage him to counter it with a positive one. I'll be interested to see whether Alistair Campbell decides to pursue his novel writing
Posted by verity at 17:15