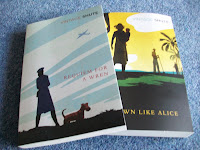 I have long been a fan of Nevil Shute, since a compilation of five of his titles kept me occupied on holiday in Austria aged about 13 (my Mum used to impose limits on the number of books that I could take; I developed increasingly sneaky ways of getting around this). So I was especially excited when I discovered that Vintage are republishing some of his books in early September, and they kindly sent me a couple to have a look at. Some of the books are print-on-demand, and I haven't yet managed to get my hands on one of those; I like the idea of print-on-demand for enabling people to get hold of slightly more obscure books, but I guess that it won't necessarily overcome their obscurity since the books won't be on the bookshelves.

A town like Alice is probably Nevil Shute's best known book; along with Requiem for a Wren it is my favourite of all of his writing. It is a book of two parts. The heroine, Jean, was sent to Malaya by her mother to work as a secretary and in due course find a husband (I wonder how often this happened during the period). However, the Second World War breaks out, the Japanese invade, and Jean is taken prisoner. Along with a number of other female prisoners she is forced to walk miles by the Japanese soldiers; Jean's knowledge of the Malay language and common sense helps many of the group to survive. Two Australian POWs befriend the group, and Jean becomes particularly friendly with the one named Joe. He steals chickens to feed the women, and is taken away; Jean thinks he has been flogged to death. After the war ends, Jean finally makes it home. When she receives a legacy, she returns to Malaya to build a well in the village that helped the group, and hears that Joe may still be alive, and goes to Australia to find him...

But why is the book called A town like Alice?
When Joe and Jean meet again, Joe is managing a cattle ranch in Willstown. However, Willstown is a disappointing place, where no-one wants to live as the nearby town of Alice Springs is far more attractive with many more amenities. Joe and Jean set out to turn Willstown into "a town like Alice".

I loved this book because I found the character of Jean hugely inspiring; firstly her tenacity in surviving the horrors of being kept prisoner by the Japanese, secondly her belief that she will be able to find Joe again, and thirdly the way that she reveals an entrepreneurial streak in transforming Willstown.

Requiem for a wren
This is a much darker tale of the Second World War; unlike A town like Alice, there is no happy ending. Alan Duncan has returned home to his parents' house in Australia, however tragedy awaits - the parlourmaid has apparently committed suicide. Alan decides to investigate and discovers that she is actually the fiance of his brother who was killed during the war. She herself had been drafted into military service, and by reading her diaries, he finds out that she felt partly responsible for his death and had gone to the house in order to do what she could to help the family. However, she could not face Alan's return...
There is less "going on" in this novel than the previous one, but it is an excellent story revealing the impact of war and what it was like to be in the services and so closely affected by death.

I did some research into Shute whilst writing this post, and found out that he grew up very near where I live in Oxford, and attended Balliol college. He worked as an aeronautical engineer and eventually set up his own company. He was in the Royal Navy Volunteer Reserve during WW2, and then settled in Australia after the war with his wife. It was interesting to discover this as I can now see the inspiration for many of his books, particularly the Australian setting. It is well worth visiting this fantastic site devoted to the author too.
Posted by verity at 17:07