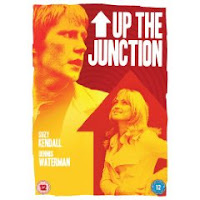 I was recently posting about Nell Dunn over on the VVV blog, who I enjoyed reading earlier in the year, and realised that I had not yet watched the film of Up the junction, nor read the sequel to Poor cow (My silver shoes). So I decided to have a Nell Dunn night and read that book and watch the film.

My silver shoes was written in 1996 (when I first bought the book, I wondered why it had not been published as a VMC; I now realise that this is because of its date) and takes the same characters - Joy, her partner Jeff, her son Johnny, and Gladys her mother, and brings us up to date with their lives, 30 years on. Joy now has a job running a sort of job-centre and is finally happily established; her son Johnny is in the army and is based over in Northern Ireland. However, it would be far too un-Nell-Dunn-like for this happy state of affairs to persist throughout the book. Gladys' bad health means that Joy has to leave her job to care to her mother; Johnny is unhappy in the army and deserts; Joy and Jeff have their difficulties. The story is told in a series of chapters which, although generally told in the third person, move between the characters. If you liked Poor cow, you should read this.

I loved the film of Up the junction. It is a more linear story than the book which is essentially a series of vignettes. Polly, a bored, fairly well off girl, goes to Battersea to see how the other half lives. She finds a job in the factory, starts going around with a couple of the girls she has met at work, and takes a flat. It is entertaining to see how her ideas on trying to fit in with the Battersea lot tend to fall short of their expectations; for example, she furnishes her flat with some secondhand furniture, but her new friends are shocked, because they would only consider buying new furniture. The story darkens when one of the friends falls pregnant and needs an abortion. A fantastic cast including Suzy Kendall, Dennis Waterman, Maureen Lipman and a period soundtrack made this a really good evening's entertainment.
Posted by verity at 17:00