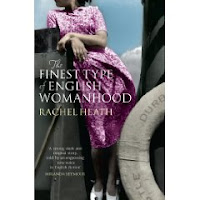 A quick review of this wonderful book - some of you may have spotted it on the library pile when I posted about my various TBR piles a couple of weeks ago, and I think Darlene mentioned that it looked like an interesting one. Well, absolutely definitely it is. I read it in one afternoon's sitting, and didn't get distracted.

This is two intertwined stories - the story of Laura and Gay - and comes out of a true story, the so called "Porthole murder" of 1947. The story of Gay is told through her diaries and Laura tells her own story, until their lives intertwine, and Laura becomes the main narrator, telling Gay's story too. The two encountered each other in Johannesburg; Laura had ended up here after being swept off her feet and marriage to a man who she barely knows, and Gay has arrived through her struggles to make a break as an actress. The first part of the book introduces us to the characters and how they end up there, and then we go on into the more eventful sections of the book where their paths have crossed through Laura's husband Paul, who has abandoned Laura for Gay, and then abandons both of them. The plot becomes thicker as the pair catch the boat back to England and the novel reaches its horrifying conclusion.

As well as being a gripping read, the book is also an extremely good depiction of both Britain in the immediate post-war period and Africa just before apartheid.

I think this would be a very good book-group book - there is lots to discuss.
Posted by verity at 13:37