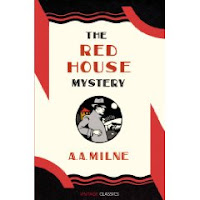 As as child, I spent a lot of time reading and dreaming about the world of Winnie-the-Pooh. As a teenager, I loved Christopher Milne's trio of autobiographical books. But it wasn't until very recently that I became aware of A.A. Milne as an author who writes for adults, through Simon's blog, which reviewed Two people a little while ago. I've yet to read Two People, a recent republication of Milne's semi-autobiographical novel, although I want to, but I've just finished reading the new paperback edition of The red house mystery, which was sent to me by the kind people at Vintage. It's been out in hardback for a while, but comes out in paperback at the start of August. It was originally written in 1922, and has thus long been out of print, so I'm really pleased that Vintage have rescued another "forgotten" title.

A murder is committed at the Red House. Anthony Gillingham, on holiday nearby, becomes involved in the case whilst visiting his friend Bill, a guest at the Red House. Gillingham, who is especially interested in the observation of people, has always harboured a desire to be a detective and appoints himself to "play Sherlock Holmes" and solve the mystery with the aid of his friend Bill as his very own Watson. The pair follow clues missed by the police As in similar detective stories, the police are inefficient, missing a number of clues, which Tony and Bill are able to draw upon to get to the bottom of the murder.

As far away from Winnie-the-Pooh as you can possibly imagine, this is a fun-to-read detective story. I was engaged by the characters and intrigued to find out what happened next. In some ways I think A.A. Milne is poking fun at the genre, almost writing a pastiche of a detective story, but he does this very well.
Posted by verity at 10:15