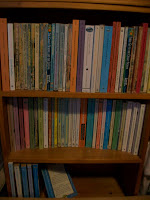 I mentioned my Chalet School books recently when talking about duplicate copies, as probably the most duplicates I have of books are of these titles. I promised to write a bit more about them, so today I want to talk about the development of my Chalet School collection.

I first encountered the Chalet School books by Elinor M. Brent-Dyer (EBD) when my Mum brought along The school at the chalet on our first summer holiday to Austria in 1992 (we went about 6 times in the next 10 years, plus another 6 times in the winter), and I loved reading about Innsbruck while we were actually visiting Innsbruck; I think it may have been this book which triggered my love of reading books in the places that they are set. I had also previously loved Enid Blyton's school stories and aged 8 was delighted to find another series to get my teeth into. My Mum then got out the rest of her books - I think she had another 8 or so from her childhood, and I must have borrowed some more from the library; both the school library and public library had copies.

A bit later on, when I was in my teens, my Mum acquired the catalogue of Topsyturvychildrensbooks, and I found some of the Chalet School books listed. They ranged hugely in price, but I bought a number of the cheaper ones that I hadn't read. I learned that some of the titles had been republished a number of times, but some, particularly the later ones in the series, had only been published once in hardback and once in paperback and were very difficult or expensive to get hold of. Around this time, I used to lend these books to a very dear school friend; we were a bit embarassed at our transactions and used to wrap them up in plastic bags and pass them under the table during maths lessons.

Around the time I went to university, I started collecting properly. This also coincided with one of my best friends from school having a clear out and I acquired a couple of quite rare titles. Armed with my student loan and earnings from my first summer at work, I spent the next year and a half pursuing the collection of the 57 Chalet School titles. I used to buy them from Topsy Turvy books, avidly scanning the latest catalogue to see if they had ones which I lacked. I had favourite searches saved on ebay and was delighted when I finally obtained a copy of Joey and Co. in Tirol. Extremely homesick at university, I used to read these books as a treat on a Saturday nigth with a box of chocolate fingers when my main essay for the week was done.

Sometime at this point, I stumbled upon Girls Gone By Publishing, who had just started republishing some of the Chalet titles. Their rationale was that many of the books had been out of print for a long time, and that many of the ones published in paperback by Armada had been heavily cut, and they wanted to make these available again as EBD had intended.
I own 13 of the GGBP Chalet School reprints, including the wonderful Chalet School Newsletter book and the EBD short stories collection. They have also reprinted her La Rochelle books (which I don't own) and the duo of Lorna books (which I do).

Finally, I acquired 3 of the hardback books when my parents sold the family home and we were clearing out the loft - it turned out that Mum had had three first editions!

I would love to own all of the series in Armada paperback (at least I'm realistic and don't want the whole series in the original hardbacks!), partly because they were how I originally encountered the books. I would also love to own all of the GGBP reprints, but I just couldn't justify carrying on buying them if I already had an Armada copy as they are quite expensive at £10 each, and there are books which I don't own a single copy of which I'd rather have,

PS: I'm really sorry about the fuzzy picture. The books are housed on a little bookcase that is also my nightstand and behind the head of the other bed; I had to roll the mattress back to take the shot. But it is perfect to have the books beside me in case I need something comforting in the middle of the night.
Posted by verity at 17:00