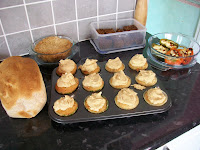 Today I have the luxury of another Monday morning off (with the exception of last Monday, I don't think I've done one since the middle of July). The purpose of having today off is mainly so that I can go to the annual St Giles Fair with my Dad; the first Monday and Tuesday in September sees a fairground set up in the centre of Oxford. It is far better to go in the middle of the day as you get longer on the rides -my Dad is an awesome dodgeum-er.

But with a husband leaving for work at 7am, I figured I'd better make good use of my time. There were peaches going squishy in the fridge, bananas going brown in the bowl, and some peppers that were about to go past their best. So - banoffee cupcakes (based on a recipe from the new Fiona Cairns book which I'll blog about soon), stuffed peppers, peach and banana crumble, treacle flapjack for the lunchboxes, and some bread for Mr W's sandwiches. Not bad for a couple of hours work.

I'm now off to have another practice cycle ride before I have to commute into the work on my bike in the morning. I'm combining it with a trip to return library books and a swim so that I can practice carrying things in my panniers!