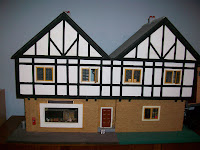 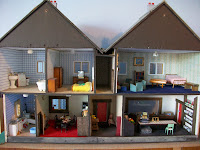 I was talking to Claire from Paperback Reader about dolls houses the other day, and took this picture of mine to show her, and thought that it would be something nice to share with my readers! My Grandad built this house for me when I was quite small and it now dominates my living room; inside there is a shop, hallway, dining room and kitchen on the ground floor, upstairs sitting room, hall, bedroom and bathroom on the first floor and I have been collecting things for it for many years. I never had dolls house dolls, but my Sylvanian Family toys were the right size and preferred occupying such a glorious residence to their Sylvanian dwellings.

Following my chat with Claire, I was inspired to read Katherine Mansfield's short story - The doll's house which I know is one of her favourites. I'd not read any Mansfield before, but took down my Persephone collection - The montana stories - and greatly enjoyed it. In fact I then went on to read most of the rest of the volume which was a wonderful introduction to Mansfield's writing (why had I left it so long?!), although I found myself slightly frustrated by the number of unfinished stories included in the volume. There's a link to the story here if you want to read a charming short story with a dolls house as centre stage.

I then remembered reading another book featuring a dolls house - by Rumer Godden, entitled The dolls house. So I went and borrowed it from the library to re-read. It's a children's book, but one which would certainly also appeal to adults. (Intriguingly I found out that it had a television series made by Oliver Postgate which was a wonderful coincidence with my other reading). It's the story of Tottie Plantaganet, a dutch doll, and the rest of her family, who get to move into a beautiful antique dolls house and live happily until another selfish doll called Marchpane moves in. The dolls are wonderfully described, but they are also characters as well as cloth people.
Posted by verity at 17:00