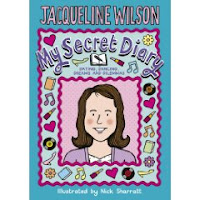 "Hello. I've nothing to write about as today was so quiet and ordinary, so I'll write down anything that comes into my head. The nice thing about this diary is that I can write anything without being laughed at; I can write down secrets with no fear of them being told; I can jsut scribble away to my heart's content. I don't even have to worry about writing or spelling because I don't mind a bit if I'm untidy. You get a lovely sense of freedom this way"


I came across Jacqueline Wilson's My secret diary at the library the other week (I was in the branch library where the children's/teen books are in the same room) and couldn't resist borrowing it! Although Wilson has had most of her success after I was a bit too old to read her books, I still enjoyed reading them as a child. But this book is absolutely fascinating!

Wilson has unearthed the diaries that she kept as a child and used them as the basis for writing a second volume of autobiography (the first is Jacky Daydream, which I haven't read but would quite like to seek out now). So the book features extracts from her diaries, contextualised by her memories of the period.

What I loved is the way that the diary deals with the extremely mundane - what happened at school, what she had for dinner, the holidays that she went on, the boys that she had a crush on, and the books that she read (this was perhaps the most fascinating bit from a bibliophilic perspective - she was a big fan of I capture the castle, read Peyton Place surreptitiously (and didn't understand what the fuss was about - she'd read far more racy things without her Mum knowing!), loved Billy Liar, liked Monica Dickens and enjoyed Gone with the wind partly for its great length. I was also interested that she had had to read Emma Smith's Maiden Trip as a class reader).

In fact, Wilson's diaries are very similar to my own from my early teens, and I dug them out. I had a hugely entertaining evening rereading 1995 (the only complete record year - my Mum bribed me £5 to keep a diary for a year (as my fiance points out this wasn't a very good return on my time even in 1995).

Here are a few sample entries (I didn't write much each day, luckily there wasn't space)
Saturday 4th February: "Quite a boring day. Worked on my project and helped to make lunch. I made beefburgers for my tea. Yum. Watched Noel's house party"
Sunday 9th February: "Went to church. The service was 1 hour 20 minutes long. I was totally bored. The same vicar is taking the service for Easter next week - arghh"
Saturday 19th August: "Went to Padstow. Had a great time in the bookshop. Bought two books. GREAT".
Tuesday 12th September: "We had double history today it was ace. Triple hockey in the afternoon sucks. Becky came round for tea"
Posted by verity at 17:00