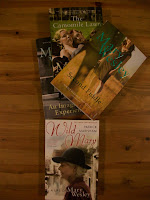 One of Cornwall's most well-known authors is Mary Wesley. I wrote about the film of her book, The Camomile Lawn at the start of my Reading Cornwall venture, have mentioned her lovely book of memoirs, and I have previously read a number of her novels. It was definitely time to read her biography. On discovering that this was still in print, I asked Vintage if they could send me a copy, and Fiona kindly obliged, and also supplied me with a few of her novels.

Mary Wesley had a hugely intriguing life. From being presented at court at the age of 18, she quickly fell into an unsuitable marriage, that did not last, but gave her a brief titled existence. During the Second World War she was recruited into MI5 where she worked on de-coding German ciphers, before resigning, pregnant with her second child to move to Boskenna in Cornwall, and embarked on a somewhat promiscuous life that led to her husband divorcing her for desertion in 1945. She then lived with a married man, Eric, but it was seven years before they could marry, as his wife refused to divorce him (this was such an engrossing part of the tale). In the mid 1950s they moved to Dartmoor and hoped to make their fortunes from writing literature, but both remained unpublished. When he died, in 1970, Mary was left without a pension or any money and took a procession of jobs to try to make ends meet. Deeply depressed she turned to writing and finally had a small success with her first novel, Jumping the queue. This gave her the motivation to continued, and nine more novels followed.

Thus, as Mary came late to writing, only the last part of the book really deals with her life as a novelist. But the best bit I found were the parts where events in her books were related to events in her life; for example drawing parallels between Wesley and Calypso and Polly in The Camomile Lawn. Both Wesley and Polly worked for MI5 during WW2, and Marnham suggests that Wesley's sexual experiences shaped both Calypso and Polly's attitude to sex.

I found Wesley hugely inspirational; to perservere with her writing and then to achieve huge success in old age is surely a lesson to all of us who are tempted to give up early on. It is clear that her rich life experience was invaluable to her creativity and providing ideas for her work.

My one quibble with the book was that although it is obviously hugely well-researched there were a few gaps. In Wesley's Part of the scenery, she mentions holidaying at Polzeath during the First World War. This wasn't mentioned in the book, yet a picture of her on holiday in "Cornwall" during that period was included. I was able to identify this as being Polzeath, but perhaps I am overzealous with regard to one of my favourite places.

Out of her novels, The Camomile Lawn is undoubtedly her most famous and most Cornish; it is certainly my favourite out of all of her novels which I have read so far. If you haven't read any Mary Wesley, then do check this one out as it is a wonderful period piece. I am looking forward to reading Second Fiddle and An imaginative experience which Vintage also sent me. I can't quite remember which of her novels besides The Camomile Lawn were set in the county - can anyone help out?
Posted by verity at 08:00