As you know, I gave up buying books for Lent, and thought with less than two weeks to go, it was time to make a report on my progress...

It hasn't been easy, but it hasn't exactly been as hard as it could have been. I've recieved several books from Virago (The wife's tale, No more than human, and The solitary summer), and am promised a couple of Orange longlisted titles from other publishers. I've also discovered the website Bookhopper, where you can upload details of books you have which you no longer want and swap them for books which other people don't want - I picked up a few books that way! And Geraldine who reads this blog kindly sent me a typescript of a book by EJ Oxenham which was a lovely surprise.

I did sort of fall off the bandwagon last Thursday, but one could argue over the technicalities of "buying" books. I was having an extremely miserable day and found myself at lunchtime in Waterstones perusing the three for two. I swiftly spotted three books that I *really* wanted, but managed to put them back in favour of a book not in the offer, The cleaner, by Maggie Gee. I'd recently read Jackie's review of its sequel, The driver, and thought that I had read this, but it turned out that I hadn't. As I had £8 of Waterstones points on my Waterstones points reward card I decided to "buy" it. I'll leave it up to you to decide whether that broke my ban or not!

Positively, I have also had a really good go at my bookcase of shame, reading books from it, and getting rid of books on it which it turned out that I didn't really want to read. As you can see it from the picture below, it looks a lot more healthy, and the piles of books on their sides are in any case earmarked for holiday reading. 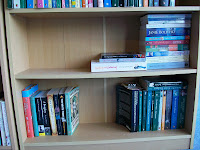 My frugality has been going well otherwise; I have made a lot of dinners out of food that was already in the cupboard and have tried to direct my baking towards using up ingredients that I had already. This slightly backfired when I decided to make a mincemeat and marzipan loaf to use up half a jar of mincemeat left from Christmas as I realised I didn't have any marzipan - I did buy some marzipan, but will use the rest in an Easter Simnel Loaf :)
Posted by verity at 17:00