I've written about my friend Emily who died in 2006 on this blog twice previously, last year, and the year before, as well as mentioned her in passing on other posts such as this one about the Casson Family books. Regular readers will know that she is my motivation for raising money for Mind (and I'm waiting to see whether or not I will get a place to do a non-swimming challenge in 2012!)

The 16th October is always a sad day for me as I grieve for my friend who only had 23 years of life, although I can also feel glad that she has now found some peace from the torment of depression, and I try to remember the many very happy times we spent together and her wonderful support when I was very poorly in 2002-2003. This week has been extremely hard as we have approached the fifth anniversary of her death; I met Mr W six weeks after she died and wish very much that they had been able to meet each other.
As I've said before, Emily was a great reader and a great baker, and traditionally I try to bake something in her memory. I have many memories of her drinking earl grey tea in our favourite coffee shop in Exeter, and us sharing muffins. I have made a couple of earl grey bakes in the last couple of years, so as soon as I spotted the Earl Grey Cupcakes in Fiona Cairn's The birthday cake book, I knew that this was a recipe that I would save for this weekend. 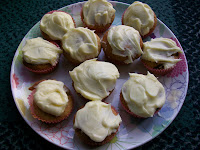 Too bad I couldn't find my piping bag - still the appearance of the icing gave me the excuse I needed for a good cry. 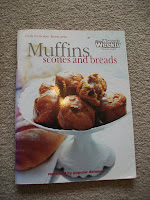 Also this week I found this book of muffins which Emily gave me along with a giant muffin tin after her stay in hospital. I've not made that many things from it, but decided to make the salmon and sour cream scones to go with soup. 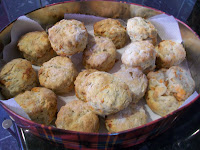 It's nice to do something else as well if I can. Last year I went to a John Rutter singing day. This year I was feeling uninspired until I had a text from Emily's Mum on Friday who was on holiday in the Trossachs. She'd had a pedicure and now had "Outrageous Pink Toes" in honour of Emily. I remembered how Mr W and I painted our toes pink for our first Great Swim raising money for Mind and decided to book a mini pedicure at the spa that I visited before our wedding. 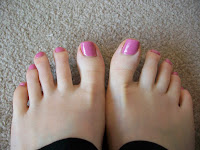 Think we will light some candles tonight...
Posted by verity at 17:13