I thought I'd do a quick library loot post since I popped to the library at lunchtime. I have to say that I am heavily aware of every library book that I borrow now that they have to be added to my panniers (which are already laden with swimming kit and change of clothes) for me to take them home. 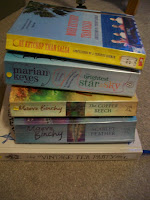 What I really wanted was a book about Tenerife; I have booked the swimming camp that I mentioned the other day and since I've never been anywhere like Tenerife I thought it would be prudent to get a book about it. I know that it is a volcanic island and that the beaches won't be white beaches of my imagination, but rather black sand, but I know very little else. Sadly, all that was in at the library was this book by an expat barman. Still - it was better than nothing so I've taken it.

My brain has been fried again this week so it's been back to Maeve again. They're chunky books and I've read them before but they're lovely to sink into at the end of the day.

The brightest star in the sky (Marian Keyes)

Like Maeve is Marian Keyes. I'm not too sure if I've read this one or not, but it looks like a good "end of the day" book for me.

You can never have too many baking/tea books. Actually, you can (umm yes, there might be a bit of a confession coming up in a few days time...), and that is why, despite hearing good reports about it, I haven't actually bought this. So I was delighted to see it in the library. Lots of lovely picturs. Again, that makes a nice "end of the day" book for me when I am too tired to actually read.

What have you been borrowing from the library recently? What do you like to read for a good "end of the day" book.
Posted by verity at 18:58